I can’t have a discussion of sexual assault and the battle for our safety without talking about the latest war zone: the internet.

Millions of people witnessed what happened to me—nude photos were released by conservative media outlets, facilitated by my abusive ex, and used to discredit and humiliate me. I was the subject of late-night talk show jokes (Monica Lewinsky and I have shared stories about our experiences since.) People made homophobic comments and death threats, and my career and my ability to do my job were questioned.

What so many people didn’t know, and maybe still don’t is that those photos weren’t “just” posted online without my consent. Many of them were taken without my consent. Think about how violating that would feel if you found out along with the rest of the world that your husband who was supposed to love and care for you, had taken nude photos of you and now was using them against you as a form of abuse and control.

I had always known my ex had many ways he could make good on his promise to ruin me if he wanted to, but I honestly did not think that he had—according to the people who released the photos—hundreds more photos and text messages, which he had been apparently compiling all along to one day remind me that it didn’t matter if I left him—he still had control over my life and future.

Much of the commentary and criticism I received was about how I should never have exposed myself by taking these photos or letting them be taken of me. I didn’t, but even if I had, the argument is, simply, another form of victim-blaming or slut-shaming. Eighty-eight percent of Americans report having engaged in sexting, either in texts or racy photos, or both. It doesn’t mean it’s your fault when your partner, whom you trusted, uses those photos against you without your consent and posts them online. To blame the person in the photo for taking it is the same as blaming the woman for the way she dressed or the alcohol she drank before she was raped. I have to imagine that the people asking that question don’t understand that cyber exploitation is a form of sexual violence and must be treated as such.

Cyber exploitation is the online distribution of intimate photos or videos without consent. This harms the victim in many ways, in their careers and their personal lives, and it puts their safety at risk. Victims of this crime may find it more difficult to get a job, or to succeed in academia. Many suffer financially, often face stalking and other threats of violence. Victims of cyber exploitation are frequently diagnosed with PTSD and anxiety disorders, and many attempt suicide—you already know how close I came to that myself.

That’s why it is so important to have laws that reflect the seriousness of this crime—so victims are protected and perpetrators are held accountable for their actions, and hopefully deterred from taking the action in the first place. Unfortunately, the state of the law around cyber exploitation and the legislative and judicial safety nets we need to connect are greatly lacking. There is a law against cyber exploitation in California that gives some protection, but most states don’t have any laws dealing with it, and the laws that do exist just don’t go far enough.

The most helpful legislative action would be to make a federal law banning the nonconsensual disclosure of intimate images altogether. My former colleague Representative Jackie Speier has been working to pass legislation on this issue since before 2016, with different versions of a bill that has yet to pass. First was the Intimate Privacy Protection Act of 2016 (IPPA), then the Ending Nonconsensual Online User Graphic Harassment (ENOUGH) Act of 2017. In 2019, she introduced the SHIELD (Stopping Harmful Image Exploitation and Limiting Distribution) Act of 2019 (HR. 2896), which “targets perpetrators who knowingly share sexually explicit or nude images of someone without their consent.”

Former presidential candidate, U.S. senator from California, and my friend, Kamala Harris, has been a champion for victims of cyber exploitation as well, introducing a SHIELD companion bill in the Senate. While the bill died in committee, there was one positive thing that came out of my cyber exploitation and resignation that followed: It reignited a push for federal legislation on the issue.

I am so grateful that people like Senators Kamala Harris and Amy Klobuchar, who had previously worked on this issue, publicly came to my defense and used my experience as a way to push forward much-needed policy. In all of the negativity that followed, there were two bright lights and I am forever grateful for their support and advocacy. As Senator Harris said, “[Releasing nude images of her] was clearly meant to embarrass her. There’s so much that people do about women and their sexuality that’s about shaming them… But, you know, let’s speak the truth that men and women are not held to the same standards. I mean, look at who’s in the White House… It sends a signal to other woman that’s discouraging them from running for office.”

Women continue to feel unsafe in both the real world and online. When we are assaulted, even from the time we’re little girls, our minds are already warped to the point that we are afraid it’s our fault if a man hurts us. We worry that we won’t be believed or that we will feel shamed if we come forward, and those concerns are founded in harsh truths.

That, my friends, is the patriarchy winning. That’s misogyny thriving at the most fundamental level.

If we can’t have even a basic expectation of safety, how can we claim our power?

Excerpted from the book SHE WILL RISE: BECOMING A WARRIOR IN THE BATTLE FOR TRUE EQUALITY by Katie Hill. Copyright © 2020 by HER Time, Inc. Reprinted with permission of Grand Central Publishing. All rights reserved.

Tue Aug 11 , 2020
HILLSBOROUGH COUNTY, FL — Despite reprovals from the Florida Department of Education, the Hillsborough County School District is moving forward with its plans to offer online learning only for four weeks following the start of school on Aug. 24. Following the school district’s 5-2 vote Thursday, Florida Education Commissioner Richard […] 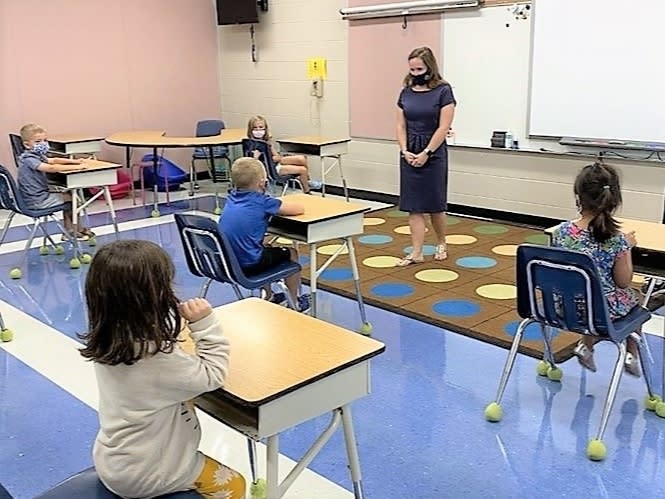