“Originally it was going to be just purely an indictment of this horrible trend in America of white male mass murderers,” says “Spree” director and co-writer (with Gene McHugh) Eugene Kotlyarenko. “Then when we came upon the idea that actually there’s a lot that horrible people like that share in common with influencer culture.”

Shot largely with GoPro and phone cameras and unfolding in a livestream format, “Spree” takes what could be a gimmicky concept and turns it into an unnervingly comic horror tale. “Stranger Things” actor Joe Keery is Kurt Kunkle, a rideshare driver and frustrated aspiring social media star who decides to start poisoning, stabbing and drilling his hapless passengers in pursuit of likes. But when he crosses paths with Jessie Adams (“SNL” veteran Sasheer Zamata) a comedian with a sharp social media game, he begins to think she may hold the key to his internet success. (The film also features scene stealing turns from David Arquette and Kyle Mooney.)

“This person,” explains Kotlyarenko, “is killing for attention.” And while the premise is satirical, it’s also alarmingly realistic. Earlier this month, reports surfaced about 18-year-old Zachary Latham, who has been accused of killing his neighbor in an altercation the victim’s family says was a bid to become “TikTok famous.”

With its eye to both the most heroic and horrifying aspects of social media, “Spree” feels all the more intimate and immediate viewed on the small screen. “Because of the quarantine and COVID, people have been glued even more to their phones and to their social media,” says Kotlyarenko. “This film is a reflection on what happens when our value system is based around attention. When that becomes the major motivator for what we post and how we express ourselves, how dangerous that can be. Social media in the last few months has been a force for social justice in a way that’s unprecedented, and that’s a really good thing. But I would also say that any time that attention is the end game, we need to start being really suspicious of our own behavior, and where our society is headed when that is the driving force of behavior.”

In addition to Kotlyarenko, Salon also spoke recently to the film’s costar Sasheer Zamata below about shooting her own performance, roller skating and why she’s much less open on social media than her mediagenic character.

The following interview has been lightly edited for length and clarity.

Are you a horror fan? Is that what drew you to this film?

You know, it’s funny. I keep saying I don’t like scary things, but then I keep watching scary movies. I was just talking to a friend the other day about “The Babysitter’s Club,” and she said, “Oh yeah, I read them all in high school.” And I was like, “I was more of a Fear Street girl.” Why was I thinking that I don’t like scary things? As a teenager I was searching for scary things! I think I do enjoy watching them, but this is my first time being a part of it, and it’s definitely a new thing for me. I’m excited for people to see me do a new thing and I hope people get a lot from it. It is scary. But also I think it’s very funny and thought-provoking. I hope people have multiple emotions when they watch it.

You played a stand-up comic before, in “The Weekend,” and you play one in this. How did work with the director to create those lines where you’re drawing on your life, but with a very different character?

Eugene wanted this to be more of a comedian who has created her career on the internet, and I’m not that kind of comedian. I did have to look at those people who are constantly talking to their phone or talking to their camera and having what the audience thinks is a personal relationship with the viewers. Going online and tweeting out everything that’s going on, that can be good for an audience, but it can be detrimental for the person who’s doing that. People can know where you are at every moment, maybe even know where your home is. And it’s interesting to play that kind of character because I try to be pretty private with my social media. I try not to let people know where I am or who I’m dating or what my family’s up to. You never know. People can get obsessed and can have negative relationships with social media, as we can see in the movie with Kurt’s character. So it was interesting to play a character who’s putting it all out there.

What it was like for you as an actor who’s been in bigger productions going into this experience where everything is shot on iPhones and GoPros and security cams? How do you perform in such a unique shooting environment?

It was really cool. It was a different type of exercise and performance because you’re talking to a person in front of you, but you’re also holding a camera and you’re trying to make sure everything that needs to be in frame is in the frame while you’re moving and talking. But the more we did it, the more natural it felt. At first it was just getting used to the choreography, but then eventually it was like, yes, this is also what we’re doing. Because even if I wasn’t shooting a movie and I was a content creator who was talking to a phone, that would just be what I did. I had to get into that space of being aware of the audience as well as what’s happening in the moment at the same time. It was really cool. And it’s really cool to be aware of multiple perspectives while performing.

There are moments in the film where we’re looking at the action unfolding from different perspectives at the same time. Did it surprise you in any ways when you saw the final product?

I don’t even know if I imagined what it turned out to be. I was aware that we were filming to multiple angles, but to see multiple things happening in front of your eyes, it’s just so cool and a little unnerving. I think that’s what Eugene wants you to have, this kind of anxiety-inducing feeling throughout. And it’s cool to see it all pieced together to make a full story.

You said you don’t think of yourself as too much of a horror fan. Getting into this role, how did you prepare? Eugene and Joe said they watched a lot of cringe videos. Did you watch a lot of horror movies?

I actually didn’t because I feel like the final girl, the part of the person who is fighting whatever evil force is happening throughout the film, is kind of the audience’s perspective. Everything is unexpected, everything’s a surprise. Everything is new. If I came in anticipating I’m going to be a badass, that it would be a different feel. But you know, I was a person who wasn’t expecting to encounter any of this that day and now I have to deal with it. That’s easier for an audience to relate to than “Yeah, she was ready the whole time.”

Has it changed the way you feel about social media, in that particularly toxic side of the culture that normal, nice people don’t really see firsthand? Did you go exploring some of that?

There’s so many different things happening on screen [in the film]. We were looking at the comment section of the audience that’s watching criminal acts happen, and they go from thinking this is fake to thinking it’s real and that’s cool and encouraging more death. And that’s scary. You know, I hope that doesn’t happen, but I also can see that being a real thing. I hope people take away that we don’t want to go that far with our relationship with social media. And maybe we should analyze it a little bit more.

Speaking of social media — you’re a comic, you perform on stage. How has this whole experience of the last few months been treating you? How are you improvising in this moment?

It’s improvisation for sure. We’ve been just cooped up for a few months and no one could anticipate that this was going to be this long. I was supposed to shoot my standup special in May. I was ready to go and then it got postponed, and now it’s postponed to next year. I hope I can do it next year, but who knows? The thing gets longer and longer, but I’m trying to do things that make me happy. I’m still writing and working on other projects and I’m roller skating and learning how to hula hoop.

After making the movie “Psycho,” Janet Leigh stopped taking showers. So how are you feeling now about rideshares? Are you never getting in an Uber again?

I’ll get in a rideshare, but I will never drink the water.

How to adapt special education to the remote-learning reality

Sat Aug 15 , 2020
Erin Honeycutt, a school principal in Meridian, Miss., sets up an online class in March. (Paula Merritt / Meridian Star via Associated Press) When the pandemic forced schools to transition to remote learning in the spring, some families struggled more than others. Families of students in special education programs were […] 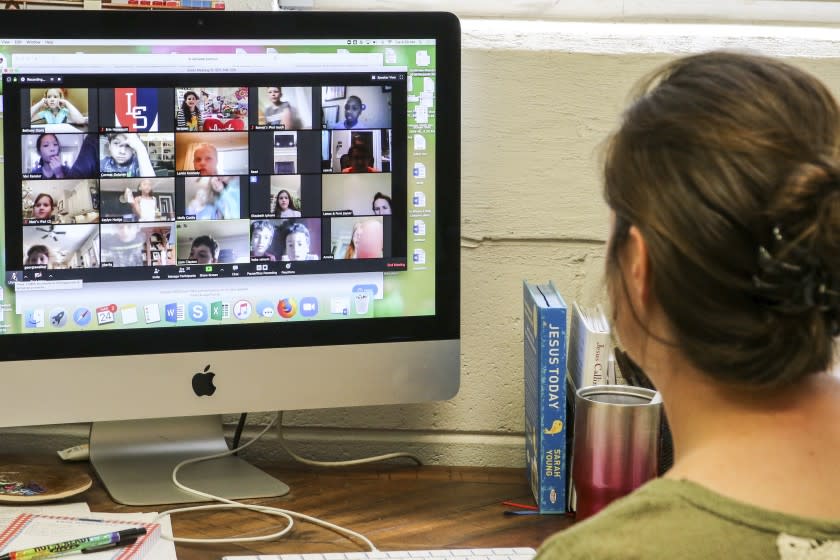