As an early summer sun beat down over a brick school building, red sequins on an outdoor stage rippled in the gentle breeze and Dr James Henderson took a minute to adjust his robe and facemask in the reflection of a car mirror.

Henderson, superintendent of Holmes County Consolidated school district in the Mississippi delta, approached the lectern in front of a line of cars daubed in balloons and handwritten messages of support.

He cleared his breath. Lowered his mask. And boomed into a microphone over the hum of car engines. “I now confirm that you, the 2020 Holmes County Central high school class, are completers of high school in the great state of Mississippi. Congratulations to my graduates,” he said.

A muted round of applause seemed to evaporate into the open air, before Pomp and Circumstance blasted over the loudspeakers to a near empty parking lot.

In the time of pandemic, this American coming of age ritual had been significantly adapted in Missisippi’s poorest county – one of the worst affected by the virus in the state. The school district, which is 99% African American, had initially planned to hold its graduation ceremony entirely online, but a backlash among parents and students pushed Henderson into a socially distanced, in-person event. Graduates arrived in cars, pulling up in front of the stage at an allotted time, received their diplomas in person, and returned to their vehicles.

“We had to give them something, because they have lost so much,” Henderson said. “Giving them the opportunity to walk across that stage. For their parents to see them walk, it’s just the ultimate, right?”

The superintendent, who arrived in 2018 when the graduation rate in Holmes county was 67%, has transformed the school district’s record over the past two years. In 2020, 96% of students graduated high school here, with 26% going on to a four-year college and 68% heading to a two-year college. Henderson attributed the rise to a district sponsored mentoring program, which led to greater school attendance, and the injection of computer resources, meaning all students had laptops to complete class assignments.

Among Holmes county’s class of 2020 were aspiring business people, doctors and surgeons, accountants, sports therapists, scientists and writers. Each was graduating into a time of economic and political uncertainty, just days before the country erupted into mass protest following the police killing of George Floyd in Minneapolis. Although personal tragedy had marked some of their childhoods, every student spoke with clarity about their vision of the future.

“Today is different from how I imagined it because not all my family can come to support me. I have my mom, my two sisters and my girlfriend. My dad called me last night to tell me how proud he was, because he wasn’t in my life like he should have been. My grandaddy just recovered from Covid so he’s watching online. My best memory of high school is catching an interception during a football game against Cleveland Central this year. I worked so hard for that moment. I’ve dealt with depression and anxiety, but I push myself so hard to make everyone proud. I’m going to Northeast Community college, and my dream is to play football professionally. But if my dream is not what God has planned, I want to be a physical therapist.”

“Finishing school during the pandemic was hard, because where I live we really don’t have internet service. I had to sit by a window and try to get signal, to get all my work together and have a chance to graduate.

They cancelled prom because of the pandemic, and I was just really sad because I never got to experience it and pick out a dress.

I want to show my mom that the daughter she raised, the person I became, made all her work worth it. She did it for a reason. I’m planning on joining the Army reserves, I want to branch out and see the world.”

“I consider the class of 2020 to be possibly the strongest class in history. It’s been so different for us to go through all of this and still be successful.

I spent two days writing my salutatorian speech to make sure it came from my heart. I told my class to stay focused, keep a tunnel vision on your dreams and let there be no limitations on you.

I’m studying at Ole Miss (The University of Mississippi) in the fall for a bachelor’s degree in science, then I plan to attend medical school. In 10 years time I want to return to Holmes county and set up a plastic surgery clinic. Every generation of my family I know of has lived in this county.”

This year’s valedictorian, Issac Randle Jr, delivered a speech urging his class to “live life and not let life live you”. His parents watched on from a parked red pickup truck, decorated with the words: “Quarantine couldn’t hold me I’m free at last.”

They cheered as Randle was the first to pick up his diploma, a broad smile across his face. He will attend the University of Mississippi to study accounting under a grant and a scholarship.

“He stayed the course,” said his mother Matilda. “And knowing that his hard work paid off. It just feels incredible.” The Randles planned to celebrate at home with a large family meal.

Matilda Randle was far from the only proud parent that morning sitting quarantined inside their vehicle. Christine Baker, who had recently been furloughed from her job at a local car factory due to the pandemic, wore a t-shirt with her daughter Ma’Kiyah’s picture printed on it. She had raised her as a single parent.

“I thanked God for allowing me to watch her walk that stage,” Randle said, tears in her eyes. “It meant everything to me. I went beyond and beneath, and put my life on the back burner to raise her.”

The school district is preparing for a return to lessons next month. But as Covid-19 cases in the county surged over the summer and parents voiced their reluctance to send children back in person, there will be only online classes for high school students this term.

Henderson watched in horror from Holmes county as Donald Trump thrust the issue of school return into the ongoing culture wars during the pandemic.

“It seems like the federal government only cares about themselves and no one else. That the economy is more important to him than human beings,” he said. “But we here are taking care of ourselves.”

Sharkela: “Before I walked the stage my mom told me to smile and remember that some kids didn’t even make it to my age to walk up there, so that made me grateful. We’ve had a classmate that passed away [in a car accident] before making it here and I thought about him.”

Amber: “I’m going to Coahoma Community college this fall to study criminal justice. I want to be a lawyer. I see what’s going on in my community and there’s a lot of people getting charged unfairly. I want to be able to help those people.”

“My fondest memory of high school will always be going with my classmates on field trips to experience different things out there in the world.

The one I remember most was when we went to the movies and watched Just Mercy [a biopic of American human rights lawyer Bryan Stevenson]. I learned that racism happens everywhere. It taught me so much and I’m glad they gave us the opportunity to go.

I’m planning to go to college and study cosmetology. I want to open my own hair and nail salon, but I want to do it outside of Mississippi. I want to see something other than this state.”

“There’s a lot of people dying and suffering right now, and I would love to be a part of the help. I’m going to Texas Southern University to study biology and then I want to train to become an anesthesiologist.

It’s a dream I’ve had since middle school, watching Grey’s Anatomy and being interested in the simple jobs, besides the doctors and nurses, that people don’t really recognize.

But tonight I’m just going to celebrate with family and have a cookout.”

A number of Holmes County Central students were grappling with the loss of close family in recent years. The county has the 11th lowest average life expectancy in the United States, at 71 years, which is seven and a half years below the national average.

Tony Christopher Jr’s father passed away in February 2017 after a brief hospitalization. “They didn’t tell us too much about it, I just woke up one day and they told us he was in the hospital,” Christopher said, an image of his father printed on his graduation stole. “I just know he’d be very proud of me graduating because it’s something he didn’t do.”

Mercedes Black lost her aunt to illness in April 2019. “If it wasn’t for her I wouldn’t have made it this far,” Black said, an image of her aunt adorning her graduation cap that was decorated in flowers. “When I was struggling in school she would help, she always told me to never give up. All she told me was that she wanted to see me graduate and walk that stage, and I just hate that she couldn’t be here to see us. She was like my second mom.”

For a moment the ceremony dispensed with social distancing as Tamia Anderson took to the stage. As she collected her diploma, Henderson offered her a split second hug as her great grandmother Roosevelt Anderson and grandmother Janice Harper screamed with joy from their car: “That’s my baby! You go girl!”

In June 2018 Tamia’s mother took her own life. The aftermath was laced with trauma.

“I didn’t really deal with it how I should have,” Anderson said. “I bottled up my emotions and it ended up turning into anger.”

She was almost moved to an alternative school, but took time out for counseling and was allowed to return after a hearing. Tamia graduated almost at the top of her class.

The Anderson family moved to Mississippi from Chicago 20 years ago after all three of Roosevelt’s sons were killed in the city, leaving Janice the only child still alive.

“I moved here to get away from Chicago,” Roosevelt said. “I wanted to find a place where the family could always come for peace and rest.”

The tragedy of the suicide compounded generations of grief. Tamia thought of her mother as she collected her diploma.

“She’s smiling so hard right now, I can feel it all over me,” she said as she exited the stage. The family returned home straight after, to a residence in the hills outside of Lexington with manicured lawns, blooming flowers and a horse grazing in a small field.

Tamia walked to her mother’s grave in a plot by the house, and reflected on the completion of her high school education.

“It means so much to me,” she said of the ability to graduate in person. “You have no idea.”

Wed Jul 29 , 2020
Click here to read the full article. The Edinburgh TV festival has revealed the 30 successful candidates selected for its popular ‘Ones to Watch’ program. Reflecting the nature of the U.K. television industry, more than 70% of the candidates, including producers, directors, writers and journalists, are freelance, and the rest […] 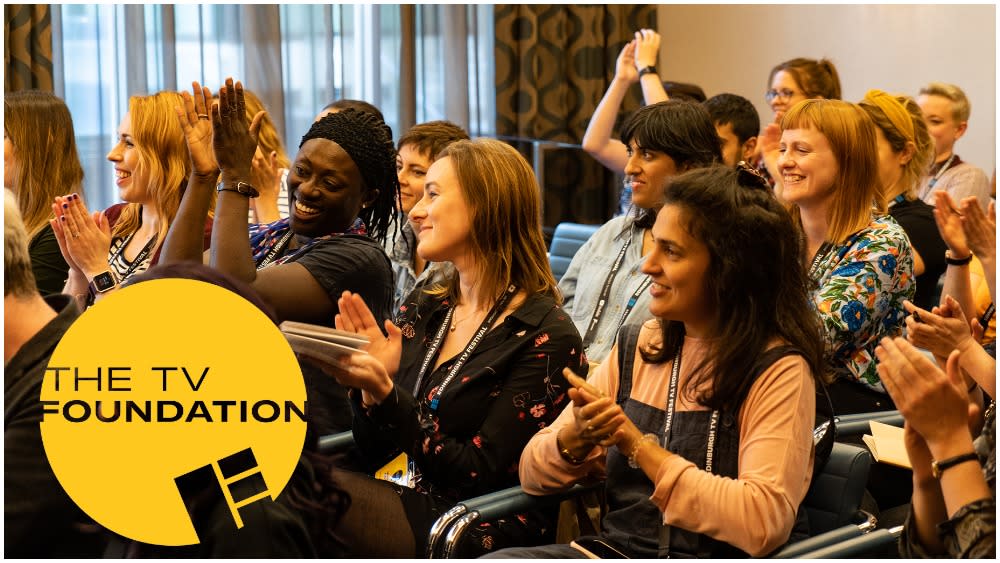