Today, A-level students around the country will have received their results, giving them an indication of where they might go to university. The results were expected to be mired in controversy following a last-minute decision by the government to allow students in England to use mock exam results if they wish.

This followed a fiasco in Scotland where more than 100,000 students were downgraded in their results, and the Scottish education secretary said they would be scrapped and returned to the original teacher predictions.

On Thursday, the government was accused of a “huge injustice” as nearly 40 per cent of A-level results have been downgraded. Labour leader Keir Starmer described the situation as a “complete fiasco”. “It was obvious this was going to be difficult but it’s been weeks or months in the coming,” he said.

For many students who might have got lower grades than they were hoping, or are relying on lower mock exam results, they might be forced to go through clearing to enter university. Or reconsider their place altogether.

Even if students do end up going, the university experience will be very different this year. Thanks to the coronavirus outbreak and social distancing guidelines, the entire student existence will be transformed.

From where you will live to how you will be taught, here’s everything we know so far about how the university experience will change due to Covid-19.

Can I defer my place?

Whether or not you can defer your university place is up to your individual university.

You will need to submit your request to the university, and some will ask you to state your reasons for wishing to defer.

A poll conducted by the University and College Union in May found that more than one in five students could defer going to university this year.

Additionally, analysis of a YouthSight poll of 516 students who applied to UK universities this year found that 17 per cent of prospective students would not enrol in higher education in September if universities are not operating as usual.

You can also choose to withdraw your application altogether, should you decide not to go to university at all. This can be done by phoning the university.

How will I be taught?

How teaching will be conducted will depend on which university you attend, as each has a different approach.

There are 137 universities in the UK, and 89 out of 92 of those have said they will offer some in-person teaching, according to a recent Universities UK survey conducted in May.

Any in-person teaching is likely to be in small groups so as to maintain social distancing.

Most universities will adopt a “blended approach” to teaching and learning, which will predominantly consist of online lectures and seminars, which can be done remotely.

More information about what your university offers will be available on their website.

For example, the University of Cambridge announced in May that it would hold all lectures online for the entire 2020-21 academic year.

But tutorials and smaller classes could take place in person, it added, so long as they can conform to social distancing requirements.

The University of Manchester also said its lectures will be entirely online, at least for the autumn term.

Meanwhile, other universities such as the University of Bolton have said they will install “airport-style walk-through temperature scanners at every building entry” when the campus reopens in September.

Will I be able to live in halls?

Again, this is dependent on what your university has decided.

Some universities have said they will expand in order for students to be able to live in halls of residence while maintaining social distancing.

Many universities, such as Aberystwyth, have banned outside visitors from staying overnight while others, such as University College London, have banned social gatherings and parties from taking place in halls.

However, some universities will encourage students who live locally to reside at home in order to make it easier for them to social distance from their university peers.

Hillary Gyebi-Ababio, Vice President Higher Education at the National Union of Students (NUS) advises students to get in touch with their university directly to ask about accomodation.

“Accommodation is usually allocated by student preference, but some universities are planning on allocating students to rooms this year differently to create ‘protective social bubbles’, so make sure to ask about this,” she tells The Independent.

Will I have to pay full tuition?

The government has said that university students in England will still have to pay the full tuition fees, despite the fact that their courses might be taught entirely online in the autumn.

However, some students have signed a petition demanding a refund due to the lack of face-to-face contact, given that students who were already enrolled at university were forced to take their tution online in March when the UK went into lockdown.

The petition, launched by student Sophie Quinn, has had more than 349,000 signatures to date.

In the UK, the maximum university tuition fee is £9,250 a year, which can be completely covered by a student loan.

However, international students may have to pay more.

How will the social experience be different?

In June, Universities UK (UUK) outlined guidance advising young people to operate within much smaller social circles at university in order to prevent the spread of coronavirus.

For example, some universities may adopt a social bubble model whereby students in the same halls and on the same courses would share a timetable and be able to socialise with other bubbles as a group.

As for Fresher’s Week, many universities have said they will create a virtual timetable of activities so that students can meet one another online.

The usual mix of pub crawls, nightclubs and campus parties will not be permitted.

Some universities, such as the University of Brighton, have banned people from staying overnight at halls of residence just for Fresher’s Week. Those who are caught flouting the rules will face a fine.

Gyebi-Ababio said: “Clearly, the university experience next year will be different.

“We know many students’ unions and universities are working very hard to ensure students have as positive as an experience as possible but, nevertheless, some aspects that some students will value will either be delivered differently or not at all.”

Nick Hillman, director of the think tank, the Higher Education Policy Institute, added to The Times: “This will clearly make having close student friendships and intimate relationships difficult.

“Universities are doing the right thing [but] I do hope it will be temporary. Certainly the experience of Freshers’ Week will be very different.”

A-Level results: If you’re going to university, pack these essentials

What can parents who work outside the home do about remote schooling?

Thu Aug 13 , 2020
People who work at grocery stores can’t work from home. Here, Anthony Capone, a Vons supervisor in Torrance, greets customers in April. (Al Seib / Los Angeles Times) With California schools starting up again virtually, many parents are wondering how they can get back — or stay — at work […] 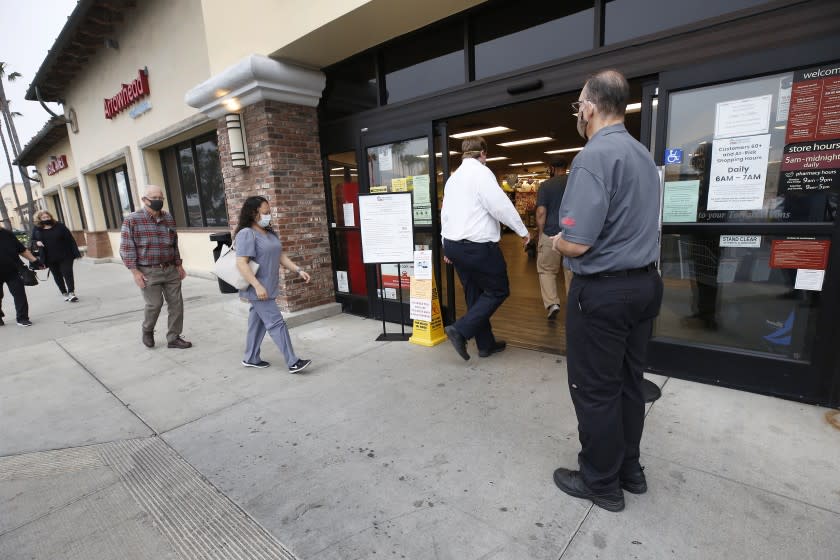