Congressional leaders and White House officials bickered over details of a proposed $1 trillion package Sunday, with stimulus checks, jobless benefits and relief for small businesses hanging in the balance.

Texas was among several states setting records for deaths in a week. One physician lamented that he was fighting a “war against COVID and a war against stupidity.” South Dakota is undeterred, prepping to host 250,000 bikers for the 10-day Sturgis Motorcycle Rally that opens Friday.

A powerful resurgence of COVID-19 infections in Louisiana is hitting the state harder than its first wave in spring, making it the only state in the nation to experience two devastating spikes of the virus, an analysis of Johns Hopkins University data shows. The state leads in COVID-19 cases per capita, continuing to outpace even Florida, Arizona and New York, where dramatic surges of the virus have occurred since the outbreak began in March.

Louisiana’s experience with COVID-19 offers insight into how a state that took strict shut-down measures to curtail the rapid spread of the virus early on can suffer a more expansive surge after reopening. It also reveals how the course of the pandemic in a state can evolve, penetrating new areas relatively untouched by the first round of infections.

FDA authorizes tests that estimate amount of antibodies in blood

The U.S. Food and Drug Administration have authorized the first two COVID-19 antibody tests that can estimate the quantity of antibodies in a patient’s blood – what’s known as “semi-quantitative” tests. Scientists still don’t know if or how much antibodies can provide immunity from COVID-19, or for how long. But the new tests could be useful to scientists as they continue to learn more about what the existence of antibodies means, Dr. Tim Stenzel, of the FDA’s Center for Devices and Radiological Health, said in a statement.

“Patients should not interpret results as telling them they are immune, or have any level of immunity, from the virus,” Stenzel said.

Thousands protested Germany’s coronavirus restrictions Saturday in a Berlin demonstration that insisted “the end of the pandemic” has arrived – a declaration that comes just as authorities are voicing increasing concerns about an uptick in new infections. With few masks in sight, a dense crowd marched through downtown Berlin from the Brandenburg Gate. Protesters who came from across the country held up homemade signs with slogans like “Corona, false alarm,” “We are being forced to wear a muzzle,” “Natural defense instead of vaccination” and “We are the second wave.”

Sun Aug 2 , 2020
The first mission to send NASA astronauts into orbit on a commercially owned spaceship came back down to Earth today with the splashdown of a SpaceX Crew Dragon capsule in the Gulf of Mexico. “On behalf of the SpaceX and NASA teams, welcome back to planet Earth, and thanks for […] 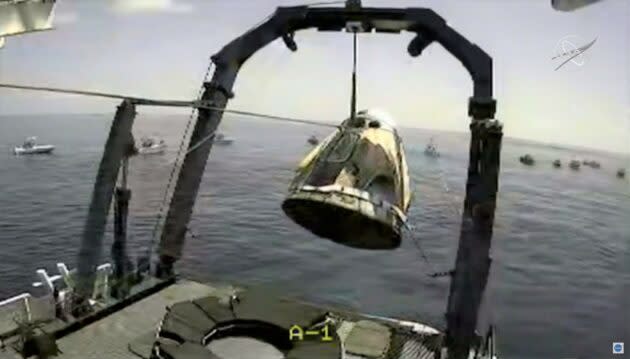