When I answer the phone, Zephyr Teachout quickly explains our call might be shorter than planned. Both she and I are at the whim of her two-year-old toddler, who is sleeping and could wake at any time.

Teachout, a law professor at Fordham University in New York, is best known for her runs for governor of the state and for Congress from New York’s 19th district (both races she lost). She has also written numerous books, including her latest, “BREAK ‘EM UP: Recovering Our Freedom from Big Ag, Big Tech, and Big Money.” Our discussion comes the day after historic Big Tech antitrust hearings in Congress.

Teachout sees the antitrust discussion as a flashpoint for understanding how democracy and corruption collide. To her, concentrations of private power, as with the Big Tech companies, can’t be fixed with, say, campaign finance reform. These companies are a threat to the public sphere and our ability as individuals to make decisions about the future.

We discussed the antitrust hearings in Congress, what she means by a “f–k-off economy,” and the “parallel governments” that massive companies have created for users of their services. She is not currently knowledgeable about blockchain and cryptocurrency, but sees them as potentially useful tools for achieving economic decentralization.

Our conversation has been edited for length and clarity.

What was your reaction to the six-hour antitrust hearings yesterday?

Wow. It was a beautiful thing. Congressman David Cicilline [D-R.I.]was totally clear: “This is about democracy versus monopoly. You guys work for us. We’re serious. We’re going to do serious things. And we have some questions.” He had this totally electrifying tone.

Related: Community Behind Privacy-Focused Smart Contract Forges Ahead After Settlement

And the committee came prepared. They had documents and they focused on the evidence at hand. It couldn’t have been more different than the Mark Zuckerberg Senate hearing after the Cambridge Analytica scandal, where senators were impressed with his earnestness and just made polite requests of him.

See also: Why We Need a Federal Privacy Law

We have to see the documents to see whether actions these companies took are in fact illegal under current antitrust law. But there is evidence that suggests violations of existing antitrust laws and evidence of things that aren’t violations of laws but are deeply disturbing, for example where platforms use their power to copy or bully other companies.

What’s a striking example of that bullying power?

Amazon. [CEO Jeff] Bezos’ first answer as to whether they used their access to data to launch and boost their own competing products was “No.” And then there’s great reporting that said the answer should be yes. So Bezos said, ‘Well, our policy is no, but I can’t promise you it’s not done.’

Everybody understands that to sell online, you need to go through Amazon. Sellers truly do not have a choice unless they happen to start with a million dollars and want to make one. Now there’s a growing understanding that Amazon has this data insight into the companies that depend on it, and is directly competing with them. Bezos then was forced to make the concession that seemed clear all along: that these companies are competitors rather than partners.

There is no such thing as no-governance regimes.

He always talks about the great partnerships, and I was reminded of the mob. Partnership can be a very loaded term depending on whom you’re talking to.

Obviously, the best way to stop companies like Amazon from doing that is by mandating that you’re either the platform or you’re competing on the platform. You can’t be both. You need structural responses like that, otherwise, you’re just playing whack-a-mole.

There are clearly forms of private government that are smuggled inside our current public government and growing in power. If you ask somebody who is an Amazon seller what judicial system they care about, they care a lot about Amazon’s system and their own mechanisms for delisting sellers.

These companies have their own intellectual property regime, their own punishment regime, and that is as important if not more so than the public one if you are caught within the web of one of these private, growing governments.

This is a very old idea that we just forgot in 1980, but understood for most American history. It’s that private power always tends to form into a government of itself. And all governments have judicial systems. Sometimes systems are internal to the company, like Amazon’s appeals processor or Facebook’s content moderation system, about whether you get to be on the platform or not.

They also use the tool of arbitration, where a company is paying judges (or employees) who then don’t have to follow the rules of making evidence public. These mechanisms of arbitration and secret decision making make it really hard for people to tell stories about what’s actually happening inside these private regimes.

The funny thing is these guys basically tell you they want to be a government all the time. It’s like Oprah Winfrey used to say, “If you listen really closely, people tell you who they are and who they’re going to be.” They all say, “We want to govern you,” and because they are in an economic sphere, we don’t hear that as “Alexander the Great is coming for democracy.” But that’s what they’re doing.

You bring up decentralization a lot in the book. How might cryptocurrencies play a role in that?

I think of these systems as incredibly important, but it all depends on what the governance mechanism is. When Amazon recently applied for a patent to use blockchain technology, which would basically require every seller to keep a ledger of where all their supplies come from, then basically the technology itself isn’t doing a lot of decentralization. The technology is in service of a centralized power.

There is no such thing as no-governance regimes. When I talk to crypto advocates, they’ll often frame it as if it is a world with no governance. But there is never an absence of governance. In the end, someone controls supply.

See also: Russian Activists Use Bitcoin, and the Kremlin Doesn’t Like It

Technology itself can’t do quite as much work as I think some of the advocates think. But again, let’s have that discussion, because I think there’s just unbelievably powerful ways in which it can be used for the good.

My question for everybody is, really, when push comes to shove, who holds the trump cards? Who makes the decision? It’s never nobody.

You talk about developing a “f–k-off” economy. What do you mean by that?

I’m trying to take the economy back from the economists. They’ve been acting like priests for 40 years and telling us that we, as mere residents of this society, have no business messing with economic terms like monopoly or antitrust, and we should just trust their assessments of efficiency. When you take the economy back for people and not economists, then things like wages matter again.

We need an economy where people have the knowledge that if their boss is really awful, they can say “f–k off” walk away. For that to happen, you need there to be actual competitors you could walk away to. Sometimes people say, “Well, there’s plenty of competition. There’s five companies that do this thing.” But there isn’t a real sense that there are meaningful options. And people should have that. I want to reclaim the idea that freedom in the workplace is essential.

How do you see privacy being affected by a handful of companies controlling so much of our economy?

There’s good research that our privacy controls got a lot worse after Facebook merged with Instagram, because they no longer needed to compete to actually protect us better than the other. There’s a nice paper on this, “The Antitrust Case Against Facebook” by Dina Srinivasan, which argues that merger was followed pretty quickly by Facebook no longer keeping its old promises towards its users. I don’t think that antitrust is going to do everything for privacy, but I think antimonopoly more broadly and a concern about power should.

Privacy means different things to different people. If you see Facebook and Amazon as forms of government, then Facebook or Amazon saying they’re protecting your privacy isn’t a really great comfort. Your government already knows everything about you.

A core question about privacy is “privacy from whom?” There is a privacy relationship between an individual and centralized power that isn’t just about an individual but the public at large or the formal forms of government.

We should move, as people are with facial recognition, towards an arena where some stuff just can’t be collected at all. We say you cannot just take out your spleen and give it to somebody or sell it. There are certain things we should have an absolute ban on collecting and are not governed by contract law.

My fear is any privacy regime is trumped by contract law, because when people can individually contract stuff away you have asymmetries of power. Right now the existing tech behemoths have a huge incentive in maintaining a business model whose goal is to maximize the information they have about people and we need to be moving towards an opposing model.

So what’s the path forward?

We’re in this exciting moment where there’s a lot of new antitrust energy, but it’s pretty new. I have particular solutions, particular things that I think we should do. But more important is to change our overall politics to make them more fundamentally about antitrust. I bet you haven’t asked your lawmakers about what they think about power. We have to recognize that we’re not going to get to the policy solutions until we get the power dynamics in politics that we want.

Is This Why Trump Doesn’t Care About The Dangers Of Schools Reopening? 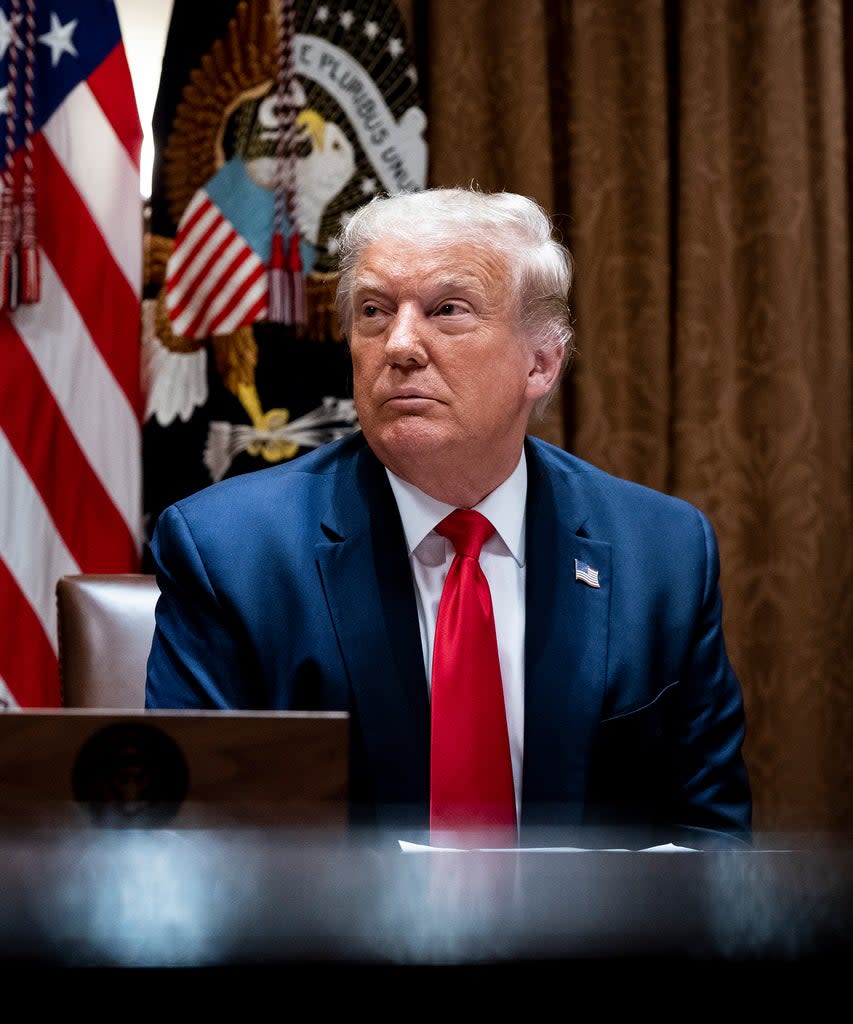