TAIPEI, Taiwan — In China, WeChat does more than any app rightfully should. People use it to talk, shop, share photos, pay bills, get their news and send money.

With much of the Chinese internet locked behind a wall of filters and censors, the country’s everything app is also one of the few digital bridges connecting China to the rest of the world. It is the way exchange students talk to their families, immigrants keep up with relatives and much of the Chinese diaspora swaps memes, gossip and videos.

Now that bridge is threatening to crumble.

Late Thursday, the Trump administration issued an executive order that could pull China’s most important app from Apple and Google stores across the world and prevent U.S. companies from doing business with its parent company, Tencent. Light on details, the decree could prove cosmetic, crushing or something in between.

If enforced strongly when it takes effect in 45 days, the order will take dead aim at China’s single most groundbreaking internet product, which 1.2 billion people use every month. An effective ban on the app in the United States would cut short millions of conversations between investors, business partners, family members and friends. The threat alone will likely start a new chapter in the deepening standoff between China and the United States over the future of technology.

Taken together with Thursday’s twin order against the Chinese-owned video app TikTok, the move against WeChat marks a shift in the American approach to the Great Firewall, which for years has kept companies like Facebook and Google from operating in China. Restricting WeChat and TikTok could be the first steps in an eye-for-an-eye reprisal.

While TikTok may be the fad of the moment in the United States, WeChat is far more important in China. A digital bedrock of daily life, WeChat emerged as a tool for Chinese authorities to impose social controls. Within China, the app is heavily censored and monitored by a newly empowered force of internet police.

Outside China’s borders, the app has become a key conduit for the spread of Beijing’s propaganda. Chinese security forces have also regularly used WeChat to intimidate and silence members of the Chinese diaspora, including minority Uighurs seeking to raise awareness of harsh crackdowns in their homeland in western China.

“The downside of this executive order is that it’s addressing these concerns by taking steps that also make it harder to directly communicate with ordinary people in China,” said Sheena Greitens, an associate professor at the University of Texas at Austin.

“It puts this administration’s policy into conflict with another one of its stated goals: to maintain openness and friendly connections with the Chinese people,” she added.

While WeChat and its owner have long straddled the uncomfortable divides that separate China’s internet from the world, they have rarely come under such direct scrutiny from the United States.

Originally created as the copycat brainchild of a Tencent engineer, Allen Zhang, WeChat mostly failed to catch on in overseas markets, even as the company spent hundreds of millions in marketing dollars to compete with WhatsApp. The app’s reliance on other Chinese apps in the isolated Chinese internet ecosystem probably hurt its chances, even as its usage innovations transformed life within China.

Outside China, it has mainly been a tether for the Chinese diaspora to their homeland.

May Han, a Chinese-born American, moved to the United States with her family when she was 9. Lonely when she first arrived, Han’s parents encouraged her to use another Tencent chat service, QQ, to keep up with her elementary school friends in China. They also hoped it would help her remember Chinese.

Eventually she made the jump to WeChat, where she still whiles away her online days chatting with about 350 friends and family members, many of them in China. Now an environmental science major at the University of California, San Diego, Han said WeChat had become the cultural glue that holds together much of her Chinese community.

“If we can’t use WeChat, our connections to China will decrease or even vanish,” she said. “Most of us have got used to using WeChat, especially older generations. Changing an app is not easy for them; it means changing their lifestyle.”

Some of her friends, she said, had already begun posting links to Line, a messaging app popular in Japan, in case they were forced to switch. To Han, the order seemed un-American.

“Trump is violating our rights to connect with our families and friends. If WeChat is really banned, the executive order seems rather unconstitutional; it violates the First Amendment,” she said. “It may sound exaggerated here, but I do hope WeChat won’t be blocked.”

The order could end up restricting a variety of dealings between Americans and Tencent.

U.S. companies could, for instance, be barred from advertising on WeChat, cutting them off from a key channel for reaching China’s vast consumer market. Tencent could be prohibited from distributing WeChat through Apple’s and Google’s app stores, which could leave users unable to receive software updates or unable to use the app entirely.

Apple and Google did not respond to requests for comment.

The White House order could even prevent Tencent from purchasing U.S. equipment for the servers from which it operates WeChat. If the company uses those same servers to run other internet products and services, then a wider swath of its business could be affected, according to David Dai, an analyst in Hong Kong with the investment research firm Sanford C. Bernstein.

This would be the “worst-case scenario” for Tencent, Dai wrote in a research note Friday.

Tencent, which has a market capitalization well above $600 billion, said Friday that it was reviewing the executive order “to get a full understanding.” The company’s shares fell almost 6% in Friday trading on the Hong Kong Stock Exchange.

TikTok said it was “shocked” by the White House order, which it said had been issued “without any due process.”

Tencent’s own products may have struggled to break through in Western countries. But it has built up a wide-ranging, if low-key, U.S. presence through investments and partnerships — all of which could be affected if the White House order results in a broad ban on working with Tencent.

Some of the company’s most significant overseas forays have been in video games, which account for much of its worldwide revenue. Tencent owns Riot Games, the developer behind League of Legends, and a large share of Epic Games, which makes Fortnite. The company’s film unit, Tencent Pictures, has been involved in Hollywood blockbusters including “Wonder Woman” and the most recent “Terminator” movie.

Tencent has also taken stakes in companies with less direct connections to its own businesses, including the electric carmaker Tesla and the social media company Snap. It has even invested in the Chinese operations of Tim Hortons, the Canadian coffee chain, to aid in the company’s expansion in China.

As Tencent’s global WeChat expansion foundered, the company tried to purchase WhatsApp but was beaten out by Facebook. If Tencent had succeeded, it may well have looked more like ByteDance, the other Chinese internet company in the crosshairs of the Trump administration. ByteDance’s best known app, TikTok, got a big boost with its takeover of Musical.ly, a short-video app built by Chinese entrepreneurs that had found success in Europe and the United States.

Both companies’ workarounds functioned only because Washington did not follow Beijing’s censorship cues. That may now be changing, though Yaqiu Wang, a researcher with Human Rights Watch, said the Trump administration’s executive orders looked puny compared to Beijing’s Great Firewall. While they raise free speech questions, she said, the concerns about WeChat’s role in democracies are very real.

“For many overseas Chinese, the popularity and multifunctionality of WeChat has made apps popular outside of China unnecessary,” she said.

“That means the Chinese government is able to control a significant portion of the information overseas Chinese receive, even outside its borders,” she added. “This could have real domestic political implications, as many members of the Chinese diaspora are voters of the countries they reside in and are, or can be, politically mobilized.”

As leaders in Lebanon deflect responsibility for explosion, skepticism grows 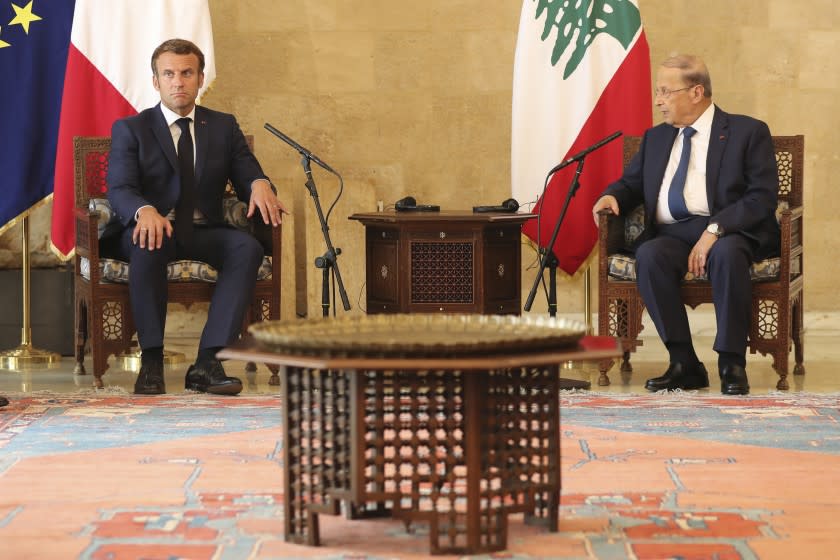