The board did go from terming masks “recommended” to deeming them “expected.” But it stopped short of what all the authoritative science says it should do.

“It’s not a requirement,” Hansen noted in an interview.

To make it worse, Hansen recently began spotting bikers rumbling through her part of eastern South Dakota on their way to the once legendary, and now notorious, annual motorcycle rally in Sturgis. A quarter-million people or more are currently in the middle of nine days of partying, often completely without masks or social distancing, as if there were no pandemic.

She calculated the threat as if it were a school math problem a fifth-grader could handle. She began by estimating that only 1 percent of the partiers in Sturgis will be infected with COVID-19.

This meant 2,500 people will be carrying the virus back the way they came. And they will have already proven themselves unlikely to wear masks or observe social distancing. Thousands more people they encounter are likely to be infected, she argued.

“I’m terrified of what’s to come in the next couple weeks,” Hansen told The Daily Beast, asking that her school district not be named to avoid any impression that she was offering anything but her personal opinions.

Anybody who doubts the danger need only go online and take a look at the videos and photos of Sturgis at full tilt in August 2020.

But schools cannot offer the excuse made by a host of officials and sheriffs across the country who say they cannot enforce a mask mandate. Schools have dress codes.

“If you can enforce a dress code, you should be able to enforce a mask requirement,” Hansen said.

Students arriving at school wearing jeans with holes or a sleeveless blouse or some other proscribed item of clothing are liable to be sent home if they cannot get somebody to bring them an acceptable alternative.

Under the board’s new mask code, students who arrive without a mask are liable to be sent to the office, at which time an administrator calls the parents. Should the parents say their kid does not have to wear a mask, it ends there. The kid is allowed to go about endangering others with an uncovered face from then on.

That prospect has Hansen fearful for her students and for herself as she approaches the start of her first school year as a teacher.

“It’s a day I’ve been dreaming about for four years, but this is not the way I thought it would go,” Hansen told The Daily Beast. “I am extremely excited, but also extremely nervous.”

She has already planned one of the first classroom topics of discussion.

“We’re going to be talking about why we wear masks,” she reported.

Hansen said she goes on the assumption that the scientists, who have almost universally come around to embracing the use of masks to mitigate COVID-19, are right.

“If they’re wrong, I look silly for a couple of weeks,” she said. “So, I don’t lose anything by wearing a mask.”

She intends to teach that everyone wearing a mask for the sake of everyone else is an example of ubuntu, a southern African concept of collective humanity that means in part, “I am because we are.”

Hansen’s effort, along with the safety of her students as well as kids throughout her state, has been jeopardized by Gov. Kristi Noem, who has actually said families should send their kids back to school without masks.

“We believe that when it comes to children, masks have the potential to do more harm than good,” Noem wrote in a fundraising email, which a spokesperson later said was “in-artfully crafted.”

On July 29, Noem held a press conference in a fourth-grade classroom at a Sioux Falls elementary school, not far from where Hansen will be teaching. The venue had apparently been chosen because it looked particularly well prepared for reopening during a pandemic. A veteran teacher, Jessica Peterson, had enlisted her husband, Chris, in constructing plexiglass partitions for each child at her own expense. This extra effort to contain the virus imparted some irony when Noem again questioned the value of masks that can in fact help do the same thing.

“The science has not proven what’s effective and what isn’t,” Noem falsely asserted.

In an Aug. 7 press release about their visit to that school, Noem made no mention of the teacher-conceived-and-financed partitions. She instead focused on something the teacher installed four years ago. And she used it to spin further the same reckless politics that led her to eschew masks and host Donald Trump’s fireworks extravaganza at Mount Rushmore on July 3—and endorse the mass gathering in Sturgis.

“I saw a great bulletin board in a 4th grade classroom,” Noem reported. “It said, ‘Put your positive pants on.’ That message reminded me of a lesson that is often easy to forget: an optimistic outlook can be tremendously helpful when responding to life’s challenges. That’s especially true in the fight against COVID-19.”

She launched into the standard Trumpian spiel that the virus is not so bad, that most of us are not at risk. She once again plugged the drug hydroxychloroquine despite it being discredited  as a COVID treatment. She latched onto some early thinking and ignored more recent evidence when she baldly asserted, “Kids are less likely to contract the virus.”

“So let’s remember to put our positive pants on,” Noem said by way of conclusion. “We need to emphasize facts, not fear. Let’s tell the story of what works in the fight against this virus, and let’s continue to get through this together.”

But Peterson was quick to tell The Daily Beast that she put up that board years before COVID-19. She added that the affirmations that went up on it—“Life is Tough. So Are You”.. “Only You Can Control Your Future”…”Believe You Can…”—were intended to help her students handle everyday classroom challenges.

“More for the kids who think math is hard or spelling it hard,” she said.

“It was not intended for a pandemic.”

Peterson, who will be teaching fifth grade in the same classroom this year, is as distressed as Hansen and many other teachers about the absence of a mask mandate.

“They’ll have lists of students whose parents said their children will not be wearing masks,” Peterson said. “Once the parents say, ‘No mask…’”

Peterson hopes the partitions will provide some protection even if a kid is on the list. Her own children, 8-year-old Cooper and 6-year-old Will, attend her school and will definitely be wearing masks when they return this year.

“We’ll wear our masks even if somebody sitting next to us is not wearing a mask,” she reported.

For her part, Hansen is particularly concerned about the virus at one of the two schools where she is assigned. It has kids from families who work at a meatpacking plant that was a COVID -19 epicenter. And some of the kids come from such modest means that she worries they will not be able to acquire clean masks.

Hansen shares Peterson’s view that positive thinking is powerful if it is well directed. Hansen actually started college wanting to become a lawyer. She then became close friends with a fellow student who has Down Syndrome. Her friend proved to be the most positive person she had ever met, seeming to see all the good in the world where too many others see all the bad.

“It’s going to be a great day!” the friend exclaimed at the start of each new one.

As she begins the school year on Aug. 27, Hansen will join Peterson in putting on both her mask and her positive pants. Their way of positive thinking is to protect and educate their kids as best as they possibly can, grounding the class in truth and fact.

“I’m going to be the best teacher they ever had,” Hansen said. “That’s the goal.”

Got a tip? Send it to The Daily Beast here

Tue Aug 11 , 2020
Arrested for alleged national security crimes, Agnes Chow hails from a generation of Hong Kong democracy activists who cut their teeth in politics as teenagers and are now being steadily silenced by China. The media cameras flashed incessantly as the 23-year-old was led handcuffed from her apartment on Monday evening […] 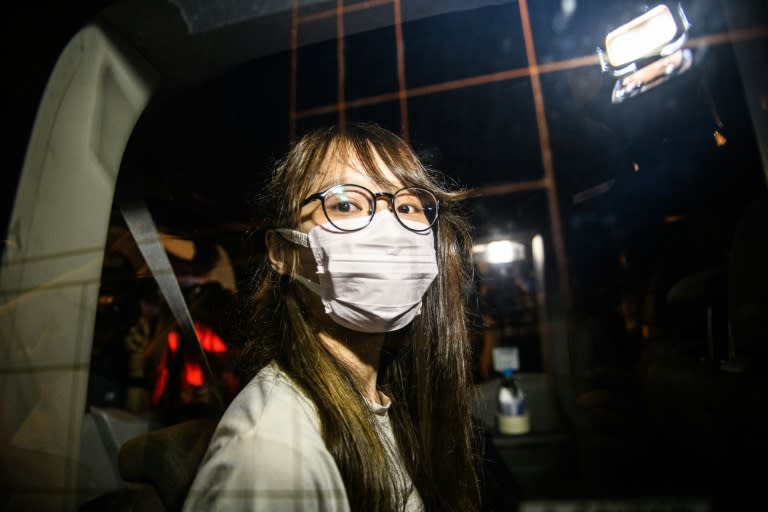