In the car business, it’s often said that brands are grand, but products pay the bills. In other words, you can capture or retain customers with what your company stands for, but long-term, if you don’t have great vehicles, you’re going to have a problem.

For almost its entire history, more than 15 years, Tesla has inverted that wisdom. A few years ago, the carmaker was barely selling any vehicles relative to its global competitors. Last year, Tesla delivered only about 250,000 vehicles, while General Motors sold almost 8 million.

Investors have decided that this means Tesla should be worth $300 billion in market capitalization, more valuable than GM, Ford, and Fiat Chrysler Automobiles combined — and topping Volkswagen and Toyota, the two biggest automakers on Earth.

Vehicle sales obviously don’t add up to $300 billion in value; Tesla’s quarterly revenue remains far below a Detroit Big Three car company. It’s a bet on the future, and a prediction that Tesla should be able to expand its near-monopoly of the EV market as that market grows from a currently tiny basis, merely 1-2% of worldwide sales.

Investor optimism is that Tesla will maintain a dominant share, increase it scale, and notch enviable profit margins, perhaps more than 10% (high-volume luxury carmakers operate at that level, while mass-market companies run in the single-digit range).

But for now, the Tesla brand is mighty. Here’s how that happened:

The Tesla brand predates its first vehicle. But it was the original Roadster that announced Tesla’s objectives to the world in the mid-2000s.

The Roadster combined high-performance with a save-the-planet mission.

The previously best-known electric car was the innovative EV1, introduced in the 1990s, but infamously killed by General Motors.

The original Tesla Roadster, with its sub-4-second 0-to-60 mph time, proved that an electric car could be more than a glorified golf cart.

The mission was clear, but it needed a compelling megaphone in the person of CEO Elon Musk. After selling PayPal to eBay in 2002, Musk sunk hundreds of millions of dollars into Tesla and other futuristic ventures.

Musk cultivated the image of a maverick nerd who lived by his own rules.

His brand-building wasn’t limited to Tesla. With SpaceX, he sought to make humanity “multi-planetary,” to “back up the biosphere” by ushering in a new age of private spaceflight, with an ultimate goal of colonizing Mars.

He was like a science-fiction film character, at times a hero, at times something of a villain — or at least a controversial antihero. He mingled with celebrities. At times, he did more than mingle. After three marriages (twice to Talulah Riley), he partnered with musician Grimes (real name: Claire Elise Boucher). The two later welcomed a son to the world.

A big part of the Tesla brand was Musk’s seemingly reflexive, problem-solving entrepreneurship, cultivated in Silicon Valley. After he got stuck in LA traffic en route to SpaceX HQ, he founded the Boring Company to dig tunnels under the freeways.

He also served as chairman of his cousin Lyndon Rives’ startup, SolarCity. Tesla acquired the company in 2016. Musk’s master plan was to power electric vehicles, among other things, by using what he called the giant fusion reactor in the sky — the Sun.

Tesla’s brand was built using almost zero money spent on advertising. Instead, Musk presided over spectacular product unveilings, such as the New Roadster in 2017.

Musk also put himself out there as the leading high-tech business leader with ideas about how to decarbonize the planet and head off a global-warming disaster. In 2015, he gave a speech at the Sorbonne calling for a carbon tax.

Musk also moved quickly when Donald Trump was elected president in 2016. The CEO wanted to press the carbon-tax case with the chief executive.

Musk also kept Tesla in the news for less virtuous reasons. A failed effort take the company private in 2018 landed him in trouble with the Securities and Exchange Commission. He wound up losing his chairman title and had to pay a multimillion-dollar fine.

In fact, the entire Tesla-Wall Street story contributed to the brand. By 2020, after a monumental rally, Tesla had become the most valuable automaker in the world, worth $300 billion. Early investors were sitting on a 6,350% return.

Musk also knew how to sense when trends were shifting. As the electric-vehicle market expanded, some tech firms moved into self-driving cars. Musk then amplified Tesla’s efforts, taking personal responsibility for the carmaker’s Autopilot semi-autonomous tech.

Tesla’s tech was as a big a part of the brand as anything else. The robots at its California factory became mechanical characters, with names from the “X-Men” movies.

They even costarred with Musk in revealing new vehicles, such as the dual-motor Model S in 2014.

If it seemed like Musk was channeling Tony Stark from the “Iron Man” movies — well, it was actually the other way around. Robert Downey Jr.’s character was based on Musk.

Musk is a genius at crossbranding. When SpaceX launched its Falcon Heavy rocket in 2018, Musk’s personal Tesla Roadster was onboard, as the payload. It was the most stunning car commercial in human history.

But it wasn’t all a big show under a big tent. Tesla was selling cars, from the Model S sedan …

The Model 3 was a mass-market sedan …

… And it had a crossover SUV stablemate, the Model Y.

There was also the Tesla Semi …

… And the completely out-there Cybertruck.

Beyond vehicles, Tesla applied its battery expertise to both home and utility grade storage.

After the merger with SolarCity, Tesla introduced its Solar Roof product. The panels were the roof tiles, rather than sitting on top of the roof.

Even Tesla’s factories became part of the branding story. The first plant in California, later joined by a Gigafactory in Nevada. A factory in Shanghai went online in 2020, and two new plants were announced for Berlin and Austin, Texas.

It wasn’t as if Tesla stood alone in the electric-car market. Competitors included the versatile, affordable Chevy Bolt EV (starting at $37,000) …

But even though the EV market globally accounts for just around 1% of total vehicle sales, by 2020 Tesla had achieved a near monopoly level of share: roughly 80%.

The power of brand-delighted Musk. He never wanted to go it alone, and the arrival of numerous new EVs from major automakers simply meant that Tesla’s mission of accelerating the shift away from fossil fuels was for real. An electric VW bus — I.D. Buzz — was but a single example.

General Motors and CEO Mary Barra committed to an electric destiny, with a plan to launch 22 new EVs by 2023 and creating an entire battery technology, called “Ultium.”

GM also revived the Hummer nameplate — as a GMC-badged all-electric pickup with a claimed 1,000 horsepower and 0-60 mph time of 3 seconds.

And Ford created the Mustang Mach-E, the first new Mustang-branded car since the mid-1960s.

Even Musk rival Henrik Fisker got back in the game, founding a new company, Fisker Inc., that promised four new EVs by 2025.

But nobody has the brand power that Musk has created for Tesla. It’s apparent now that the competition is playing catch-up. But that might be impossible. Experian recently said that of Tesla owners it surveyed, more than 80% would own again. It isn’t going to be easy to take on Tesla.

As More Schools Stay Online, One That Opened Now Has a Virus Problem

Sat Aug 1 , 2020
Greenfield Central Junior High School in Greenfield, Ind., where some students were ordered to quarantine for two weeks after a student tested positive for the coronavirus on the school’s first day with students back, July 31, 2020. (A J Mast/The New York Times) One of the first school districts in […] 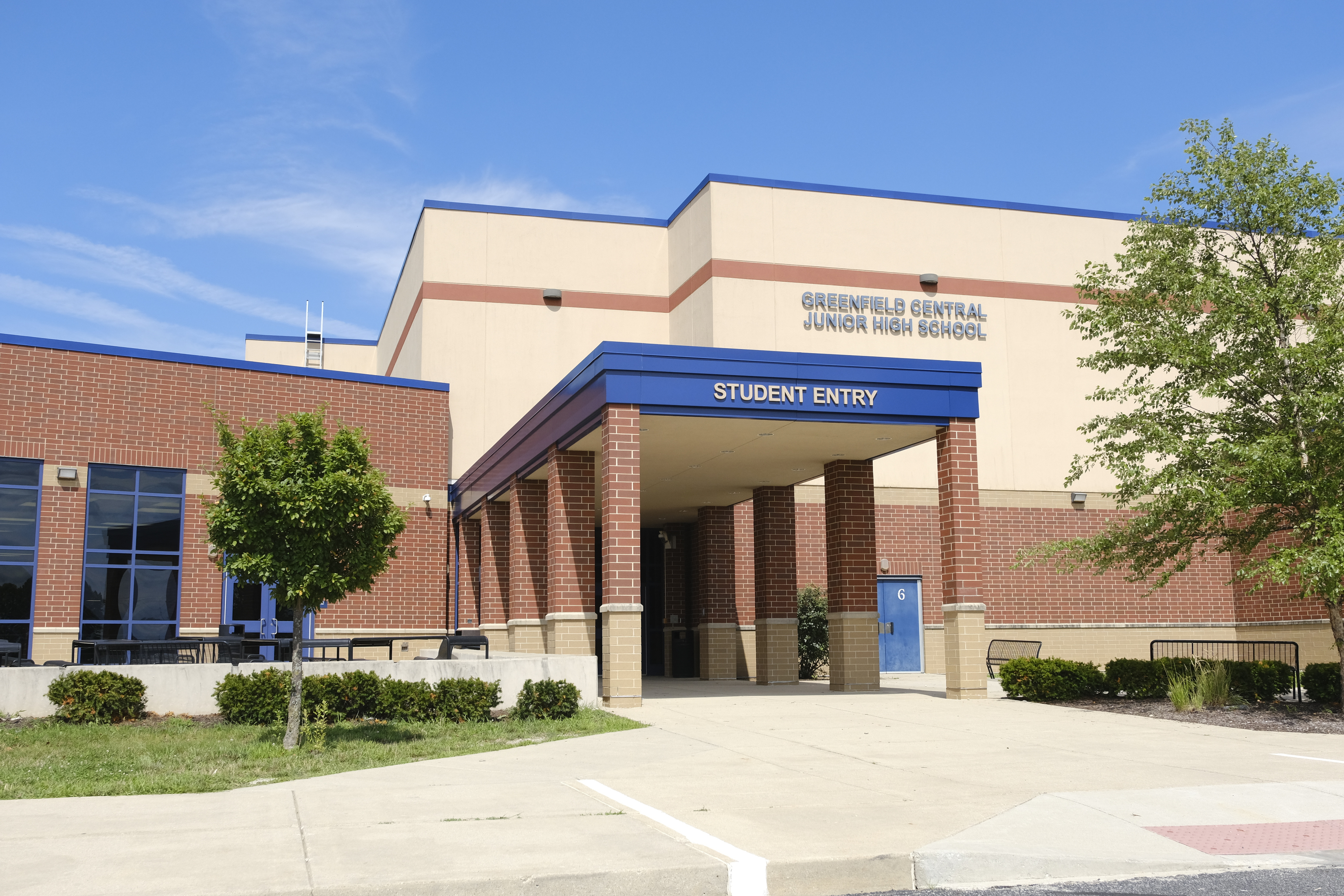