WASHINGTON — Not long after the early 2017 publication of a notorious dossier about President Donald Trump jolted Washington, an expert in Russian politics told the FBI he had been one of its key sources, drawing on his contacts to deliver information that would make up some of the most salacious and unproven assertions in the document.

The FBI had approached the expert, a man named Igor Danchenko, as it vetted the dossier’s claims. He agreed to tell investigators what he knew with an important condition, people familiar with the matter said — that the FBI keep his identity secret so he could protect himself, his sources and his family and friends in Russia.

But his hope of remaining anonymous evaporated last week after Attorney General William Barr directed the FBI to declassify a redacted report about its three-day interview of Danchenko in 2017 and hand it over to Sen. Lindsey Graham, R-S.C., chair of the Senate Judiciary Committee. Graham promptly made the interview summary public while calling the entire Russia investigation “corrupt.”

The report blacked out Danchenko’s name and other identifying information. But within two days, a post on a newly created blog titled “I Found the Primary Subsource” identified him, citing clues left visible in the FBI document. A pseudonymous Twitter account created in May then promoted the existence of the blog. And the next day, RT, the Kremlin-owned, English-language news and propaganda outlet, published an article amplifying Danchenko’s identification.

The decision by Justice Department and FBI leaders to divulge such a report was highly unusual and created the risk it would help identify a person who had confidentially provided information to agents, even if officials did not intend to provide such a road map. The move comes at a time when Barr, who is to testify before lawmakers Tuesday, has repeatedly been accused of abusing his powers to help Trump politically.

Former law enforcement officials said the outing will make it harder for FBI agents to gain the trust of people they need to cooperate in future and unrelated investigations.

“These things have to remain very closely held because you put witnesses at risk,” said James W. McJunkin, a former FBI assistant director for counterterrorism. “To release sensitive information unnecessarily that could jeopardize someone’s life is egregious.”

A lawyer for Danchenko, Mark E. Schamel, said that because his client’s name had already been exposed, he would not ask The New York Times to withhold it. He acknowledged that “Igor Danchenko has been identified as one of the sources who provided data and analysis” to Christopher Steele, the British former spy who compiled the dossier and whose last name has become shorthand for it.

Danchenko’s identity is noteworthy because it further calls into question the credibility of the dossier. By turning to Danchenko as his primary source to gather possible dirt on Trump involving Russia, Steele was relying not on someone with a history of working with Russian intelligence operatives or bringing to light their covert activities but instead a researcher focused on analyzing business and political risks in Russia.

Spokespeople at both the FBI and the Justice Department declined to comment. An email sent to an address listed on the blog was not returned.

Trump’s supporters on Capitol Hill have long sought access to Justice Department and FBI documents about the Russia investigation. The FBI director, Christopher A. Wray, told lawmakers in late 2017 that the bureau was wary of turning over records related to its effort to verify the Steele dossier to Congress. “We are dealing with very, very dicey questions of sources and methods, which is the lifeblood of foreign intelligence and our liaison relationships with our foreign partners,” he said.

But since his confirmation early last year, Barr and other Trump appointees have approved a wave of extraordinary declassifications that the president’s allies, including Graham, have used to attack the Russia inquiry.

Graham said he had asked the FBI to declassify the interview report after it was described in an inspector general report last year because he wanted the public to read it. He stressed that he did not know the identity of Steele’s source and said he did not know whether the FBI released identifying information it should have protected, saying the bureau had appeared to be “painstaking” in redacting such details.

“I don’t know how he was exposed,” Graham said in an interview Friday. “I didn’t see anything in the memo exposing who he was. I mean, you can believe these websites if you want to — I don’t know. I know this: It’s important for the country to understand what happened here.”

In addition to their political implications, the documents have at times revealed the closely held secrets that Wray feared jeopardizing: sources of information and the methods used for gathering it.

Transcripts of recordings released in April resulted in the identification of a confidential FBI informant who had agree to wear a wire when talking to George Papadopoulos, a former Trump adviser who was convicted of lying to the FBI. Other released transcripts of a Russian diplomat’s conversations with former national security adviser Michael Flynn revealed that the bureau was able to monitor the phone line of the Russian Embassy in Washington even before a call connected with Flynn’s voicemail.

The unmaskings from the release of the FBI report have already spiraled beyond Danchenko. Building on the knowledge of his identity, another Twitter user named a likely source for Danchenko. Online sleuths were trying to identify others from his network who were cited but not named in the Steele dossier.

The release of Danchenko’s interview summary likely put him and other sources in Russia’s sights, said Sen. Mark Warner of Virginia, the top Democrat on the Senate Intelligence Committee.

“Under Attorney General Barr, the levers of the Department of Justice continue to be weaponized in defense of the president’s political agenda, even at the expense of national security,” said Warner, who did not confirm that Danchenko was Steele’s primary source or discuss his committee’s own investigation into Russian election interference. “I’m deeply concerned by this release. There is no doubt that the Russians are poring over it to see if they can identify this individual or other sources.”

Danchenko also cooperated with the intelligence committee on condition of confidentiality, according to two people familiar with its investigation.

Some posts on the blog that revealed Danchenko’s name are dated before Graham released the interview report, but the Twitter user who promoted the blog said he or she had backdated the posts to change their order.

Born in Ukraine, Danchenko, 42, is a Russian-trained lawyer who earned degrees at the University of Louisville and Georgetown University, according to LinkedIn. He was a senior research analyst from 2005 to 2010 at the Brookings Institution, where he co-wrote a research paper showing that, as a student, President Vladimir Putin of Russia appeared to have plagiarized part of his dissertation.

According to his interview with the FBI, Steele contacted Danchenko around March 2016 and assigned him to ask people he knew in Russia and Ukraine about connections, including any ties to corruption, between a pro-Russian government in Ukraine and veteran Republican strategist Paul Manafort. Steele did not explain why, but Manafort joined the Trump campaign around that time and was later promoted to its chair. He was convicted in 2018 of tax and bank fraud and other charges that grew out of the Russia investigation.

Steele later expanded Danchenko’s assignment to look for any compromising information about Trump.

By Jan. 13, 2017, the FBI had identified Danchenko, who soon agreed to answer investigators’ questions in exchange for immunity.

The FBI told a court it found Danchenko “truthful and cooperative,” according to the report by the Justice Department inspector general, Michael E. Horowitz, although a supervisory FBI intelligence analyst said Danchenko may have minimized aspects of what he told Steele.

Graham said he wanted the public to be able to see for itself how the interview report “clearly shows that the dossier was not reliable and they continued to use it anyway.”

Danchenko did nothing wrong in accepting a paid assignment to gather allegations about Trump’s ties to Russia and conveying them to Steele’s research firm, Orbis Business Intelligence, said Schamel, who attended his client’s FBI debriefings but whose name was redacted from the report about them.

“Mr. Danchenko is a highly respected senior research analyst; he is neither an author nor editor for any of the final reports produced by Orbis,” Schamel said. “Mr. Danchenko stands by his data analysis and research and will leave it to others to evaluate and interpret any broader story with regard to Orbis’ final report.”

The Steele dossier was deeply flawed. For example, it included a claim that Trump’s former lawyer Michael Cohen had met with a Russian intelligence officer in Prague to discuss collusion with the campaign. The report by the special counsel who took over the Russia investigation, Robert Mueller, found that Cohen never traveled to Prague.

And Danchenko’s statements to the FBI contradicted parts of the dossier, suggesting that Steele may have exaggerated the soundness of other allegations, making what Danchenko portrayed as rumor and speculation sound more solid.

The Steele dossier played no role in the FBI’s opening of the Russia investigation in July 2016, and Mueller did not rely on it for his report.

But its flaws have taken on outsized political significance, as Trump’s allies have sought to conflate it with the larger effort to understand Russia’s covert efforts to tilt the 2016 election in his favor and whether any Trump campaign associates conspired in that effort. Mueller laid out extensive details about Russia’s covert operation and contacts with Trump campaign associates, but found insufficient evidence to bring any conspiracy charges.

The dossier did play an important role in a narrow part of the FBI’s early Russia investigation: the wiretapping of Carter Page, a former Trump campaign adviser with close ties to Russian officials, which began in October 2016 and was extended three times in 2017. The Justice Department’s applications for court orders authorizing the wiretap relied in part on information from the dossier in making the case that investigators had reason to believe that Page might be working with Russians.

Page was never charged, and Mueller’s report only briefly discussed him. Horowitz scathingly portrayed the wiretap applications as riddled with errors and omissions.

He had a box cutter, ignored commands, and a cop shot him six times. Were there better options?

Sat Jul 25 , 2020
LAPD Officer Toni McBride has faced scrutiny after she fatally shot a man April 22. The discussion partly involves her status as a gun-toting model and her father’s position with the Police Protective League. (Dillon Precision Products) Ten years ago, after a controversial case in which an LAPD officer shot […] 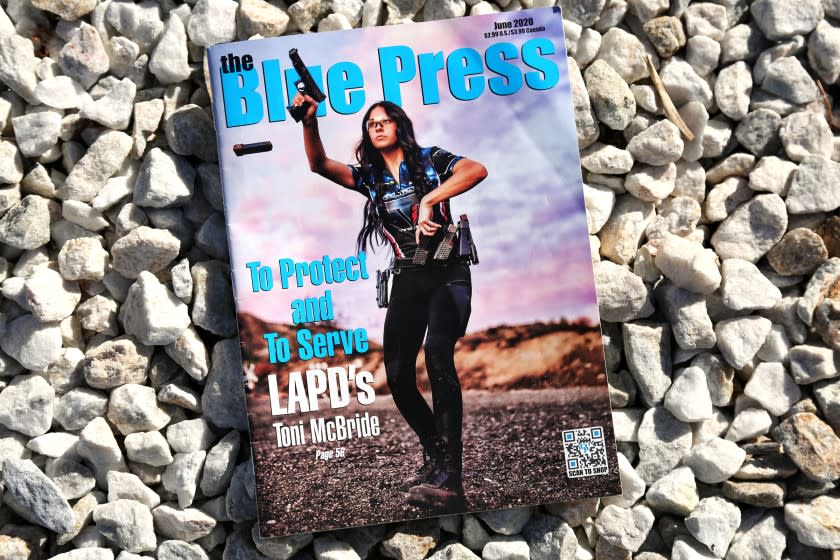