On Saturday, Gifford shared a heartwarming post about her longtime colleague and friend, who died Friday of natural causes.

“There are no words to fully express the love I have for my precious friend, Regis. I simply adored him and every day with him was a gift,” she wrote on Instagram.

“We spent 15 years together bantering and bickering and laughing ourselves silly—a tradition and a friendship we shared up to this very day. I smile knowing somewhere in Heaven, at this very moment, he’s making someone laugh,” Gifford continued. “It brings me great comfort knowing that he had a personal relationship with his Lord that brought him great peace. I send all the love in my heart to Joy, to his children, to the rest of his family and to the innumerable people he touched over his legendary life. There has never been anyone like him. And there never will be.”

Throughout their years on television, the two became an iconic pair, known for their playful banter and genuine connection on the show.

REGIS. There will never be another.

After 15 years, Gifford left the ABC show but the pair remained close after her departure. In 2001, the franchise became Live! with Regis and Kelly, co-starring Kelly Ripa before he left in 2011 after 23 years on-air.

Despite Gifford leaving the show, Philbin made it clear how much their time together meant to him.

Last year, Philbin appeared on Today for Gifford’s final day at the studio and he called with a special message. “Kathie Lee, you want to know the best part of my life, my TV life, was in the 15 years I spent with you, from 1985 to 2000,” he said. “We stayed friends throughout the entire game and it was a lot of fun.”

RELATED: Kelly Ripa Pays Tribute to Regis Philbin After His Death: ‘He Was the Ultimate Class Act’

Before Gifford left Today, she revealed that she called Philbin to discuss the news. “Kath, I’m so happy for you … There’s not a day that goes by that I don’t think about the 15 years we spent together and how much I loved you,” she recalled Philbin saying, USA Today reported.

Philbin also told Gifford that Live! was “never the same after you left.”

The former co-hosts have spent numerous occasions together since parting ways on camera. In January 2018, the two were spotted catching up over dinner at Craig’s in West Hollywood.

Philbin and Gifford had previously reunited in March 2017, when Philbin filled in for Today show host Hoda Kotb when she was out on maternity leave.

Philbin died on July 24. “We are deeply saddened to share that our beloved Regis Philbin passed away last night of natural causes, one month shy of his 89th birthday,” his family shared with PEOPLE in an exclusive statement on Saturday.

“His family and friends are forever grateful for the time we got to spend with him – for his warmth, his legendary sense of humor, and his singular ability to make every day into something worth talking about. We thank his fans and admirers for their incredible support over his 60-year career and ask for privacy as we mourn his loss,” the Philbin family said.

Sun Jul 26 , 2020
Photograph: Jim Watson/AFP/Getty Images One hundred days before the presidential election, Joe Biden has built a commanding and enduring lead over Donald Trump, whose path to victory has narrowed considerably in the months since the coronavirus pandemic began. Related: ‘Nobody’s ever seen anything like this’: how coronavirus turned the US […] 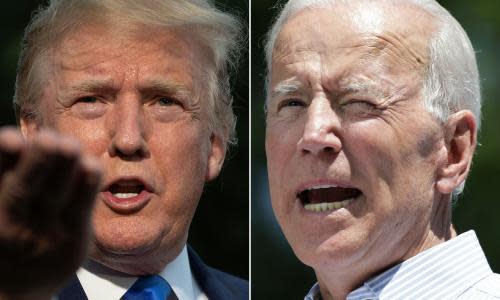