One day about 20 years ago, actor Romany Malco was walking down Venice Boulevard, girlfriend and cousin in tow, when he decided to buy a set of fake teeth. He popped them in, kept strolling down the street, started talking like a prison-hardened life coach, and Tijuana Jackson was born.

The character dates back to the era of Y2K, when Malco (“Think Like a Man”) set up a camera with “that blurry 60 Minutes interview background” and talked into the lens for hours, riffing as an ex-convict who attended “These Streets University(™)” and now works as a wannabe life coach. There was magic in that character, he said.

That magic ignited just as the Internet opened up new opportunities for content. Tijuana Jackson may predate social media, but once he hit YouTube, he took off running his mouth about everything from the Jonas Brothers to community service.

But there’s a method to Malco’s madness: Jackson uses humor to discuss contemporary issues like systemic racism and the mass incarceration of communities of color. “I initially started this character as a means of educating poor people in a way that I wasn’t educated when I was growing up,” Malco said. “No one had ever come to me and explained to me the importance of personal finance … I was not taught the etiquette of pursuing investors. I wanted to use this character to educate this disenfranchised group.”

Although the felon-turned-motivational-speaker began long before the current moment, the character in Malco’s new movie, “Tijuana Jackson: Purpose Over Prison” speaks precisely to America’s current crises.

Malco talked to The Times about prison humor, the racial disparities of the judicial system and where krumping came from. The following interview has been edited for clarity and condensed.

What was the strategy behind deciding to shoot Tijuana Jackson’s first movie as a mockumentary?

When you listen to the way that the character talks, and you look at the subject matter, and you combine that with his antics and the comedic tone, things are raw. Things are very raw. And for some reason, not breaking that fourth wall just didn’t seem to meet the authenticity of everything else involved in the project.

And I also realized that what was missing was I needed that one audience member going along for the ride … we needed someone outside of that ecosystem to be the observer and represent the audience. And that’s where the idea for a documentarian came into the picture.

Satire requires a lot of legwork — you need to know your material back to front. What did the research process for this film look like?

The research process starts with my life. Growing up as a kid, I always had friends that I knew who had a friend or a family member who had just gotten out of prison. A lot of us don’t realize it, but the system isn’t the only thing that ostracizes you once you’ve become a felon. The family and the community tend to ostracize you as well. Through that, I learned a lot. I learned to develop an empathy for what these brothers were going through. And that’s kind of what got me interested in it in the first place.

I made a video called “The Racket of Racism” a few years back — when I started doing the crowdfunding campaign for this project — which I think really took a deep dive into the history of the United States of America, dating all the way back to Lincoln, through modern times. And what could be traced was the money line of racism, starting back as slaves were brought to the United States of America. I continued to trace that need for cheap and/or free labor throughout politics and throughout the court system, and everything that has been documented up until present day, so that I could find the through line. And in all the research that I did, what I found is what became the movie “Tijuana Jackson: Purpose Over Prison.”

I also interviewed a lot of inmates. I interviewed and had on set consultants who had served 10 years, 19 years, 12 years. And I myself had once been arrested, but I’d never been to prison. I’d been to County in Los Angeles. So through personal experience, and through books, data, court transcripts, I was able to put together this narrative that really reflects what it’s like to be a felon in America: the way in which the system is actually intended to disenfranchise you even more once you’ve been arrested.

The seed for this character and this idea was born during the beginnings of the Black Lives Matter movement, but long before this current civil rights movement. How does the current moment fit into this narrative?

That’s what’s so creepy. What’s going on right now is what Tijuana Jackson has been yelling about for 15 years. He’s been online talking about this, he’s been making videos about this: A movie about exactly what people are protesting right now.

One of the things that’s probably most important is that America has finally awakened to the fact that there are major racial disparities within our judicial system. The truth of the matter is that up until now, it seemed as though Black voices were not enough. And so having our white counterparts and antiracists of all other different nationalities chiming in seems to resonate on a global scale. People can no longer be quiet about it.

I feel like Tijuana Jackson is probably one of the first projects to launch since this. It takes an approach that isn’t vengeful, that isn’t coming from a sense of anger, but it’s simply coming from a place of the sincere, authentic struggle that people like George Floyd and Rayshard Brooks fight on a daily basis. And it helps to aid in educating on how difficult it is to navigate the world once you’ve been deemed a felon in the United States of America, particularly for a nonviolent crime. There is no way you can watch the film and not identify this character — no matter what race you are — in your family or within yourself.

You’ve said you view this film as a “gateway” to the education and humanization of discussing all Black lives. What do you mean by gateway, exactly?

You love Black culture, don’t you? You like to dance to the music, doing a TikTok to the beat. But do you know what it’s like to actually stand in the shoes of a Black man? Do you understand what inspired krumping? I believe that Tijuana Jackson is going to help people make connections. Because as a culture, there’s a disassociation. Think of the way in which the country was founded. Think of the Native Americans. Think of what has happened to Black Americans within the first hundred years of the country being founded. My point being that that pattern of disassociating is synonymous with the culture.

What I mean by “gateway” is that Tijuana Jackson is going to help people actually take ownership and identify with where they disassociate. Help people identify the connection.

You said you wanted to be really sensitive to the experiences of felons and ex-cons. Have you had any of those folks watch the movie, and what did they think?

I’ve had them watching the videos since 2000. But the feedback is that people are like, “Dude, I swear to God this dude stole my story. Bro, I swear to God.” People are saying if they had known me, if they knew me, if we grew up together, they would’ve sworn up and down: I stole their story.

I think it’s important for us to understand that in the depiction of inmates, what we don’t realize is if you haven’t lived in communities where one in four of the men in the community has been taken off to prison … your connection to law enforcement is like what the television and Hollywood shows you. That’s a very different interpretation of what life is like in America. You’re experiencing a different America.

We’ve become rather insensitive to people who make mistakes in our country. And we are quick to villainize the people that make mistakes. We completely forget who we are. We forget what we’ve done. And I don’t believe that there can actually be real connection among humans until we are able to connect with ourselves.

Who is your target audience for this movie? Who do you want to watch it?

When you’re denied these things, you live an insulated life. I believe living an insulated life often leads to self-destruction. So my goal is to hopefully reach the people that experience that, and that crosses all borders. I’ve got an even more specific answer: I want antiracists to see this movie. All class levels. I need antiracists to see Tijuana Jackson. That’s my demographic.

But those people might already be thinking in this vein.

I think that just because you quote history doesn’t mean that you will make history. There’s a lot of us that are quoting history and making fun TikToks, but we’re still spending our money among companies that support oppression. Among companies that have been selective in who they hire, based on race and gender. People are acting, and that’s great. But there’s still a huge disassociation going on. Otherwise, you wouldn’t be calling your Black friends to get a pat on the back for your efforts in the fight against racism.

You call this a “pocket film.” Can you explain what you mean by that?

Another thing that was rather serendipitous is that I’ve never romanticized the idea of having this film in theaters. It’s never crossed my mind. I didn’t know if people would be comfortable laughing at these things. Because they’re really serious matters being told from the perspective of someone who’s heavily institutionalized, and maybe doesn’t understand what the proper decorum is for certain environments. And he speaks in a certain way that can be found rather offensive. I think that people might be uncomfortable laughing out loud in public at some of the things that happen in this movie.

I always intended to make it the type of movie you could watch on your phone, take a break, go into your bathroom, watch the movie away from your kids, 20 minutes, and then put it away, and come back to it later. That’s why I called it a pocket film: Because despite it being rather serious subject matter, it’s a bit abrasive in its humor.

This quarantine has created the perfect setting for a movie like this. You can laugh comfortably in the safety of your own home, and hopefully learn as well. Were you ever aware of the fact that inmates have to pay off so much money to all these different entities when they are on parole? Did you know that some prison phone systems require a $13 deposit before you can even begin to make calls? People are just oblivious to this. And without being preachy, I wanted to find a way to introduce all of that to them.

JDT's Mauricio on excitement for MSL return, unprecedented break and who profited the most

Sat Aug 1 , 2020
When Mauricio dos Santos Nascimento by Johor Darul Ta’zim before the start of the 2019 Malaysia Super League (MSL) season, he had a gigantic task of replacing the incredible Marcos Antonio at the heart of the then five-time MSL champions. For five seasons, Antonio was a rock for JDT as […] 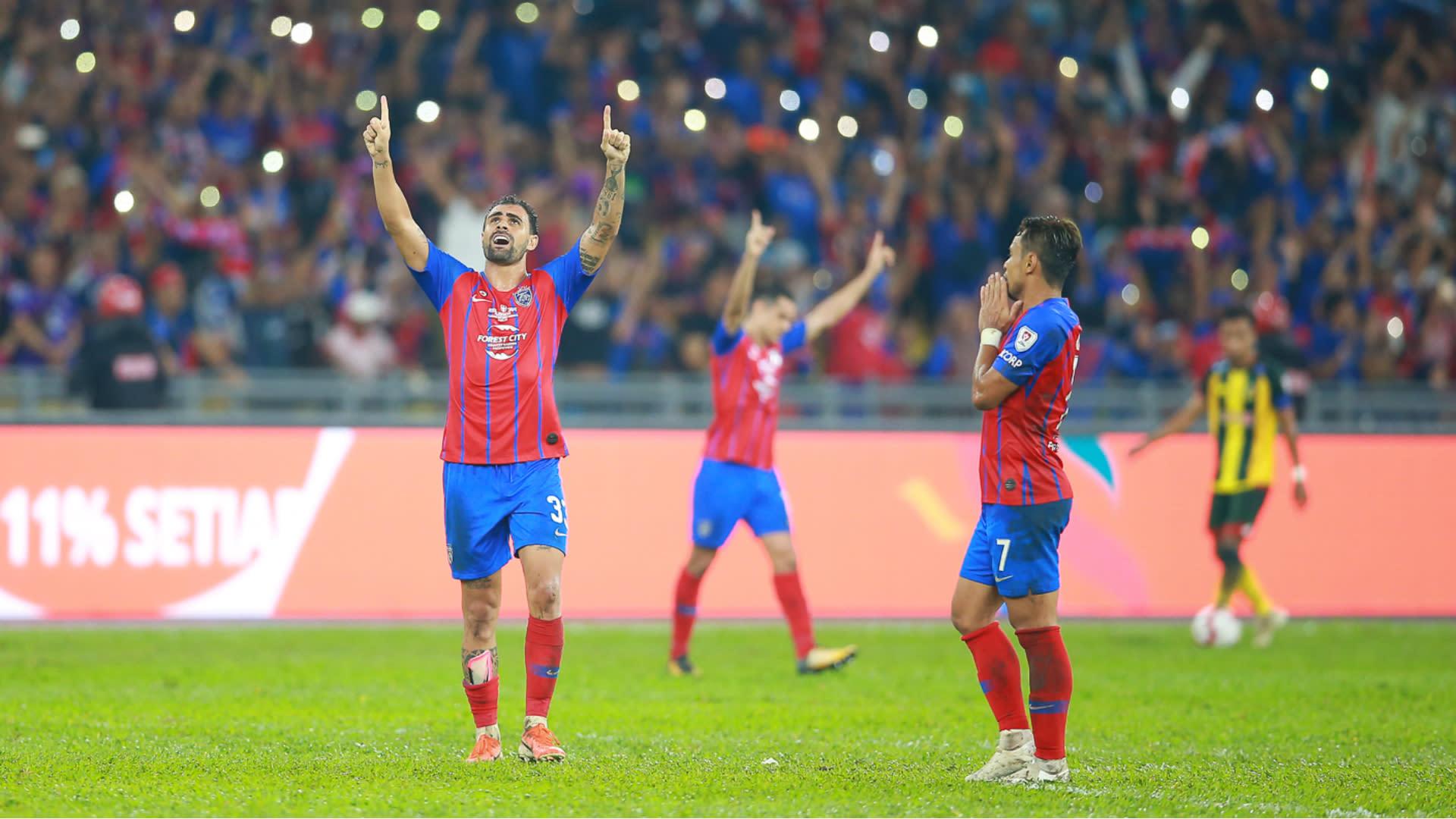