President Trump is now mulling the White House as a locale for his Republican National Convention acceptance speech. He has already canceled plans to host festivities in Jacksonville, Florida and Charlotte, North Carolina.

But his suggestion has raised legal and ethical questions about hosting campaign activity on the federal government grounds.

“Is that even legal?” GOP Senator John Thune said to reporters when asked about the president’s plans. “I assume that’s not something that you could do,” the Republican senator from South Dakota said, citing a potential “Hatch Act issue.” The senator added, “I think anything you do on federal property would seem to be to be problematic.”

But the president defended the idea Wednesday, calling it a “very convenient idea” during a White House news conference. “Well it is legal,” Mr. Trump said. “There is no Hatch Act because it doesn’t pertain to the president. But if I use the White House, we save tremendous amounts of money for the government in terms of security, traveling. If we go to another state, some other location, the amount of money is very enormous, so that’s something to consider also.”

While enforcement of the Hatch Act rests on the president, who has previously avoided taking any action to uphold the federal law, the Republican Party would be responsible for covering the cost of any political event.

“The campaign still needs to pay for the event,” Kedric Payne, general counsel and senior director of ethics at the Campaign Legal Center tells CBS News. “How does the campaign reimburse for expenses like the cost of the White House lawn?”

In addition to the Hatch Act, Payne noted federal criminal law prohibits the president and vice president from utilizing White House staff to engage in political activity. “If government employees help facilitate a political event because the boss tells them to, that implicates President Trump. Trump is not exempt from this law that prohibits him from forcing government employees to engage in political activities.”

Party officials planning the convention are considering the White House South Lawn as a possible locale for the acceptance speech. According to Republicans familiar with planning, the three nights of programming will feature a combination of live events and virtual livestreams.

Deputy communications director for the Republican National Committee Rick Gorka told CBS News the GOP is “working through a lot of plans to make sure that we have the online content and the digital content, and maybe some in-person events as we again make the case for what the president has done over the last four years and why he deserves another term.” Gorka added that national monuments were a “possibility” for the Republican spectacle. “There’s a lot of beautiful monuments across this country,” he said. “A lot of options from the St. Louis Arch, I know we had a great event at Mount Rushmore. We have some great national parks and great open places. There’s a lot to showcase about this country.”

The Washington Post first reported Tuesday night that both the South Lawn and Trump International Hotel in Washington, D.C., are being floated as venues for the president’s acceptance speech.

Legal experts note previous officeholders have confined political activity in the White House by hosting political events in the president’s residential quarters. “The sensible position would be as risk averse as possible,” John Holcomb, professor of business ethics and legal studies at the University of Denver told CBS News. “Go to the basement, go to the [White House] residence, the Trump hotel, and then straighten out any financial reimbursement issues, which would ultimately come back to the RNC. And if necessary, get the White House staff out of the way, who might be potentially legally vulnerable.”

Democratic National Committee Chairman Tom Perez told called the president’s suggestion of a White House political speech “ethically breathtaking.” In an interview with MSNBC, Perez said, “It would be a nonstarter for any Democrat running. That is so unethical. But there’s no surprise there.”

The coronavirus pandemic, which is still surging in many states, has torn apart both parties’ convention plans. Democratic organizers announced Wednesday that Joe Biden will not be traveling to Milwaukee to accept his party’s nomination, opting to instead deliver an address from his home state of Delaware.

For his part, President Trump previously planned to accept his party’s nomination in person before thousands in an arena in Charlotte. The president uprooted party festivities to Jacksonville after North Carolina Governor Roy Cooper, a Democrat, cited public health concerns amid spiking COVID-19 numbers. Mr. Trump later called off Jacksonville festivities amid an influx of new Florida coronavirus cases.

“It’s remarkable to see all of the planning that has gone into the 2020 convention, adapting to the changing public health dynamic,” a former senior official charged with planning GOP conventions told CBS News. “And then to just see all of that go away. That’s insane.”

The Trump campaign deferred to the White House on questions of ethics and legality. White House officials told CBS News, “The president is not subject to the Hatch Act” but did not address potential implications for administration staff. The RNC did not immediately respond to request for comment.

The Trump family has faced criticism for profiting from the president’s reelection bid amid the pandemic.

President Trump told Fox News he would be joined by the first lady, who also plans an address during GOP convention program, in addition to Trump allies Representatives Matt Gaetz and Jim Jordan. “I will probably do mine live from the White House,” the president added. “If for some reason somebody had difficulty with it, I could go someplace else.”

Thu Aug 6 , 2020
CHICAGO (AP) — The State Department says Russia is using a well-developed online operation that includes a loose collection of proxy websites to stir up confusion around the coronavirus by amplifying conspiracy theories and misinformation. The disclosure on Wednesday was rare for the Trump administration, which has been cautious about […] 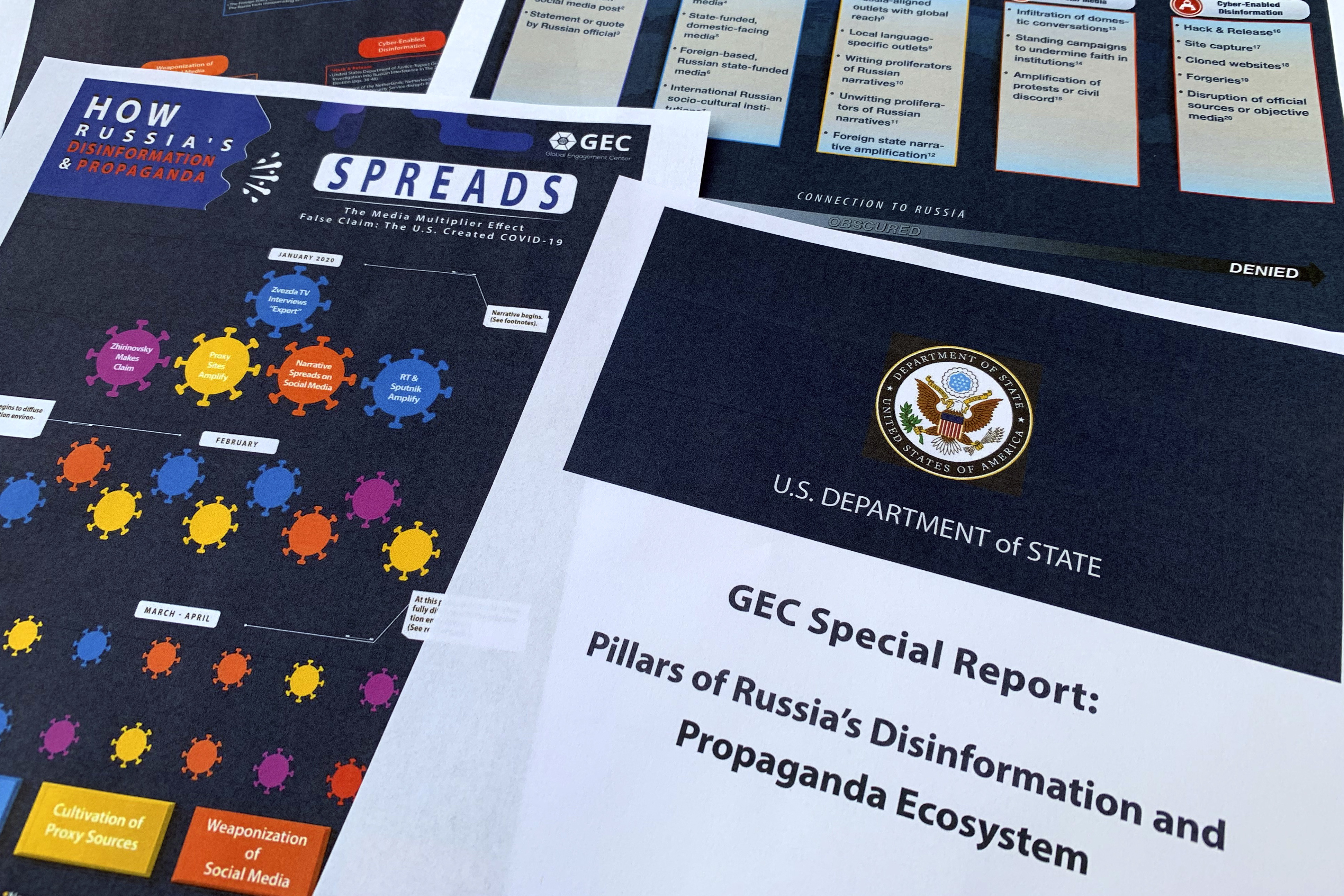