The U.S. was approaching 150,000 COVID-19 deaths Wednesday while President Trump was trying to figure out why Dr. Anthony Fauci has such a high approval rating and “nobody likes me.”

Fauci, director of the National Institute of Allergy and Infectious Diseases, has been a top adviser to the Trump administration during the pandemic.

Trump added that “Nobody likes me. It can only be my personality.”

Twitter continued a crackdown on tweets about fake cures that has already ensnared the president. This time, Madonna got called out.

The numbers remain bleak. The three states with the largest populations – California, Texas and Florida – all set records for deaths in a week. In Oregon, Gov. Kate Brown announced students in most counties will likely not return to in-person classroom instruction this fall as counties must report 10 or fewer new cases per 100,000 residents over seven days.

The Chainsmokers concert draws a crowd – and wrath from Cuomo

New York state’s Health Department will investigate “egregious social distancing violations” in Southampton after video showed crowds standing close together at a concert featuring The Chainsmokers. Gov. Andrew Cuomo questioned why local law enforcement didn’t break up the show, saying it was “out of control and all the rules were being violated.” The state’s investigation will look at the role of local leaders and reports of “ongoing” violations in the village of Southampton, Cuomo said. The Saturday night concert, dubbed “Safe & Sound,” was billed as a charity drive-in show.

“We have no tolerance for the illegal reckless endangerment of public health,” Cuomo tweeted.

California, Florida and Texas were among nine states recording a record number of deaths over a seven-day period that ended Tuesday, a USA TODAY analysis of Johns Hopkins data shows. Nine states also set records for newly confirmed cases. Arkansas had the dubious distinction of being on both lists. The state had newly confirmed cases and 54 deaths.

Instagram flagged Madonna’s account Tuesday night, and a post appeared blurred with a warning over the video: “False Information.” The text continues, “Reviewed by independent fact-checkers,” and provides a list of incorrect assertions in Madonna’s post. Madonna shared a video and caption about unproven coronavirus conspiracy theories. The video, about a fake cure, echoed the same misinformation as a clip that was taken down from Twitter after President Donald Trump shared it. On Madonna’s post, fact-checkers note that there is not yet a cure for COVID-19 and that hydroxychloroquine is not a cure.

A protest in support of schools reopening in-person classes for the upcoming school year amid the COVID-19 pandemic drew around 100 people Tuesday evening at the Arizona Capitol. The protest is called “AZ Open Our Schools Rally” and was organized for families and educators who want in-person learning options at Arizona schools.

Nearly 300 recent Bayside High School graduates and their guests in Brevard County, Florida, have been asked to quarantine for 14 days after health officials said an attendee at Saturday’s commencement ceremony had COVID-19. Families were notified about the case Monday in a letter from the Florida Department of Health in Brevard County.

The individual tested positive for the virus “shortly after attending,” said Anita Stremmel, the department’s assistant county health director, in an email to FLORIDA TODAY. “The Florida Department of Health was notified about the positive case by Brevard Public Schools and we confirmed the positive result.” The letter said families should isolate any students who participated in the ceremony, but Stremmel said the advisory applied to anyone who was present at the event, which took place on the school’s football field.

McDonald’s to close 200 US restaurants

McDonald’s is permanently closing 200 of its 14,000 U.S. locations this year with “low-volume restaurants” in Walmart stores making up over half of the closures.

During its quarterly earnings call Tuesday, the fast food giant said the closings were previously planned for future years but are being accelerated. Officials also shared the continued impact the coronavirus pandemic is having on sales globally.

“Within a matter of weeks, the McDonald’s system made operational modifications across 30,000 restaurants, while closing and then reopening another 9,000 restaurants,” CEO Chris Kempczinski said during Tuesday’s earnings call. “We introduced new safety procedures in all our restaurants, modified our menus, and developed new contactless ways to serve our customers.”

Ten crew members with Germany’s AIDA Cruises learned they tested positive for COVID-19 after boarding two ships in Rostok, Germany, on July 22. The infected crew members have been taken off the ships, and the remaining crew members are secluded on board waiting for another round of test results, Roger Frizzell, spokesperson for Carnival Corp., parent to AIDA Cruises, told USA TODAY. The ships are still expected to depart in August on their first voyages since the start of the coronavirus pandemic.

“The crew on board these two ships have already tested negative twice, so the additional testing is purely precautionary,” Frizzell explained. The ships are “not under quarantine,” according to the line, but crew members still on board will not be allowed to go ashore. The 10 positive cases are not related to onboard activities, the cruise line said in a release. Frizzell said all crew members were tested before flying to the embarkation area and before getting on board but that they waited for the second test results in seclusion on the ship before learning that they tested positive.

One of the nation’s largest teachers’ unions is authorizing its members to strike if their schools plan to reopen without proper safety measures in the middle of the global pandemic. The American Federation of Teachers, which represents 1.7 million school employees, issued a resolution on Tuesday saying it will support any local chapter that decides to strike over reopening plans. In providing its blessing, the union is also offering local chapters access to its financial and legal resources.

Although the measure says strikes should be considered only as a “last resort,” it lists conditions the organization wants met for schools to reopen. It says buildings should reopen only in areas with lower virus rates, and only if schools require masks, update ventilation systems and make changes to space students apart.

Herman Cain remains hospitalized on oxygen a month after being admitted

Former Republican presidential candidate Herman Cain remains hospitalized for COVID-19 after being admitted nearly one month ago. An update to his Twitter account on Monday announced the 74-year-old “is still in the hospital being treated with oxygen for his lungs. His doctors say his other organs and systems are strong.”

“Re-strengthening the lungs is a long and slow process, and the doctors want to be thorough about it,” a following tweet continued, with another thanking supporters for their prayers. “He really is getting better, which means it is working,” the posts concluded.

“People should understand that they are more likely to die from cancer that has progressed as they sit at home to prevent COVID-19 … than they are to die from COVID-19,” said Dr. Therese Bevers, medical director of the University of Texas MD Anderson Cancer Center.

Parents and students who have dealt with repeated cancellations of the ACT college-entrance exam because of the coronavirus found more frustration Monday and Tuesday when they tried to register for upcoming tests. ACT opened registration for September and October tests Monday, but shut down its registration site shortly after opening it “due to high demand,” according to a statement from the organization posted on Twitter. The testing group said it would have an update on Tuesday, only to move the announcement to Wednesday at noon Central Time.

JetBlue revealed Tuesday that two of its employees in Florida died of COVID-19 complications July 16, bringing to eight the number of known workers from the airline who had died from COVID. “Losing two beloved members of our JetBlue family on the same day is a painful reminder of this pandemic’s reach and severity,” CEO Robin Hayes said at the start of JetBlue’s earnings conference call with Wall Street analysts and reporters.

Hayes paid his respects to Brittney Jones, an airport operations employee, and Orlando Tavarez, a quality control inspector. Both were most recently based in Fort Lauderdale. On a similar call in May, Hayes had asked for a moment of silence for six JetBlue employees killed by the virus. Most airlines have not publicly revealed the names of workers who died because of COVID-19, and Hayes’ gestures have drawn praise.

Wed Jul 29 , 2020
On July 17, the nation lost a giant who stood 5 feet, 6 inches tall. Rep. John Lewis risked his life to ensure basic rights for all Americans. He was known as the “Conscience of Congress.” I knew him as a respected colleague. And while he has left us, his […] 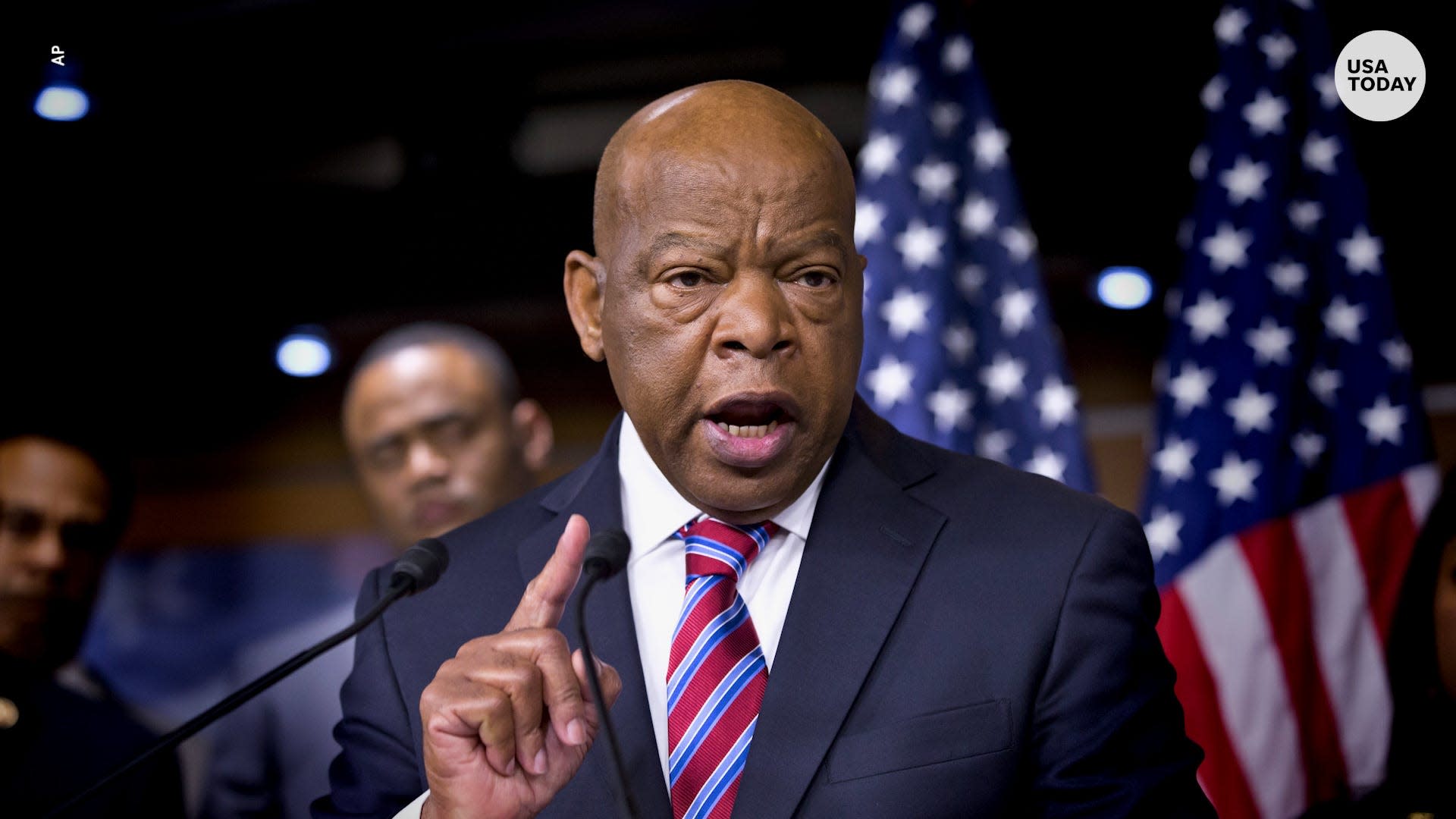