Brad Parscale once memorably compared the Donald Trump re-election campaign to the planet-smashing Death Star from the Star Wars films. “In a few days we start pressing FIRE for the first time,” he tweeted on 7 May.

Now, Parscale resembles one of those hapless imperial officers, usually played by a British actor, lifted off his feet and choked by Darth Vader’s distant but deadly grip as retribution for letting rebels escape.

The campaign manager’s demotion this week was all but assured from the moment that Trump’s first rally since the coronavirus outbreak turned from Force into farce. To start, it was scheduled for Tulsa, Oklahoma, on 19 June, which is Juneteenth, a holiday celebrating the emancipation of enslaved people, so had to be postponed a day.

Then Parscale boasted that the campaign had received more than a million ticket requests. Imagine the dread welling in the pit of his stomach when he saw how few people actually showed up. Hundreds of teenage TikTok users claimed they had applied for tickets as a prank with no intention of attending.

Parscale had proudly tweeted a photo of an outdoor stage being built for an expected overflow crowd that never materialised; the stage was hastily dismantled, almost too much metaphor to bear. Things were scarcely better inside the arena, where the US president faced the humiliation of thousands of empty seats like a standup comic whose punchlines no longer land.

The catastrophic failure hit home because rallies are Trump’s lifeblood, their raucous atmosphere much more to his taste than the staid West Wing of the White House. They were crucial in energising his support in 2016. And Parscale had bragged how rallies were vital tools for hoovering up data about everyone who registers to feed his digital behemoth.

“The campaign is all about data collection,” Parscale, 6ft 8in tall with Viking beard, told the Guardian in January. “Every aspect of this campaign. Everything we do, if you go to a coalition event, you sign up for a thing, you touch it.”

Rally organiser Michael Glassner was the first to pay the price for Tulsa when he was “reassigned” to other duties. But now Parscale has gone the same way as, far from redeeming himself, he has run a campaign that lurched from bad to worse.

Another rally, due to be held in Portsmouth, New Hampshire, last Saturday was cancelled because of a tropical storm that failed to appear. The coronavirus pandemic is spinning out of control in the US, breaking records and threatening to stall economic recovery. Poll after poll shows Democratic presidential candidate Joe Biden thrashing Trump come November’s election; the Democrat has opened up a 15-point lead, according to a Quinnipiac University national poll on Wednesday.

If 2020 has demonstrated anything to the president, it is that science, economics and now public opinion cannot be wished away. Parscale’s demotion 111 days before election day is the most public acknowledgement yet that he finally understands he’s losing.

David Axelrod, former campaign strategist for Barack Obama, wrote on Twitter: “He said the other day, during his thorny hour-long Rose Garden diatribe against @JoeBiden that polls were FAKE and he’s doing really well. Then he fired his campaign manager.”

Like Trump himself, Parscale was a political novice in 2016 who relishes provoking liberals and stoking outrage. When he was appointed manager of the 2020 effort because of his digital expertise, it was widely seen as evidence that campaigns are now won and lost online.

He will continue to lead the campaign’s digital strategy but has been supplanted by Bill Stepien, more from the old school of Republican field operatives. Stepien was campaign manager for the former New Jersey governor Chris Christie before working on Trump’s 2016 campaign and as a White House political director.

Mike Allen, co-founder of Axios, wrote in his Thursday newsletter: “One top Republican told me Stepien, who once was Chris Christie’s top aide, is an expert at a vital skill in Trumpworld – candidate management.”

Trump should not be written off. It is easy forget to just how chaotic his 2016 campaign was: building the plane while flying it, often backwards. He got through three campaign managers: Corey Lewandowski, then Paul Manafort in June, then Kellyanne Conway in August.

And even Kushner can do little to tame Trump himself. He has always run his own campaigns and acted as his own spokesperson. His miserable poll ratings are a reflection of his own continued mishandling of the coronavirus pandemic and tone deaf response to racial injustice more than anything else. They are unspinnable by even the wiliest spin doctor. All available evidence suggests that, if the election were held tomorrow, Trump would suffer a historic annihilation.

Ed Rogers, a political consultant and veteran of Republican campaigns, said: “By any objective standard the Trump campaign is in a lot of trouble. But switching this campaign hand for that campaign hand won’t have much impact unless the candidate performs better. He has to perform better substantively and be a more effective and consistent communicator. I don’t think tinkering with the organisation chart will make much difference.”

It appears that Trump is rearranging the deck chairs on the Death Star. A chastened Parscale, for his part, reached on Thursday for a different epic of light and dark from a long time ago. “Romans 12:14: Bless those who persecute you; bless and do not curse them,” he tweeted.

Fri Jul 17 , 2020
Michael Neff sensed what was about to happen. It was late March, and Texas had surpassed 1,000 confirmed cases of COVID-19. He braced as governor Greg Abbott announced that many businesses—including gyms, restaurants and bars—would be prohibited from serving customers indoors. The Cottonmouth Club, his Houston cocktail bar, would have […] 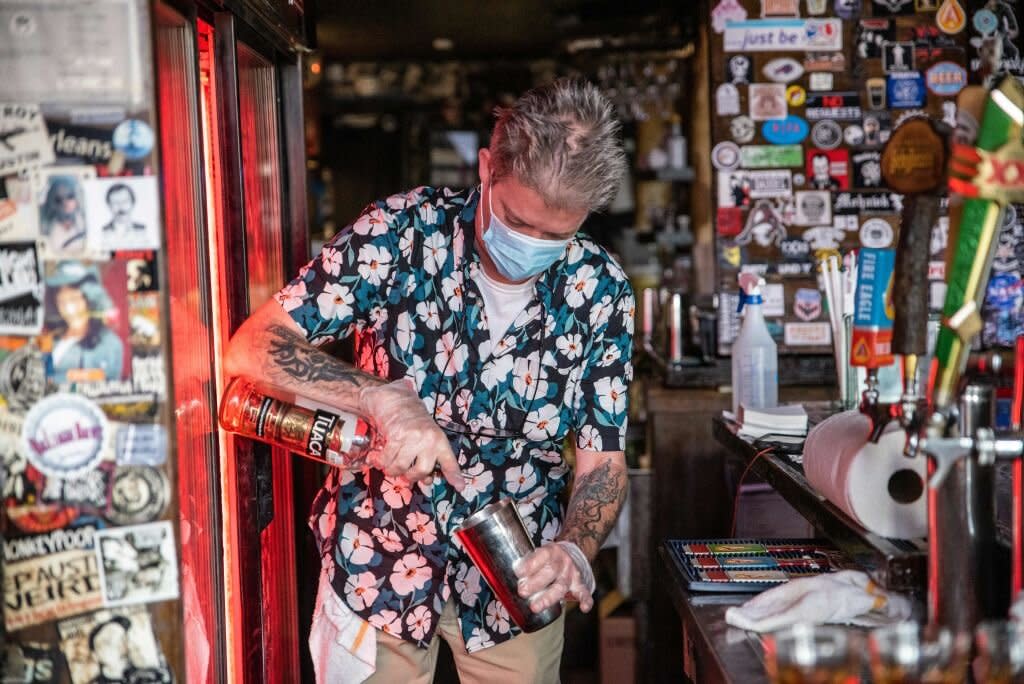