Jesuit high school, an all-boys Catholic school in New Orleans, is proud of its alumni. In 1978, its website records, student debaters Moises Arriaga and Brett Giroir “had a legendary season, winning the City Championship, District Championship, State Championship and the NFL National Championship”.

Forty-two years later, Giroir’s debating skills are facing their ultimate test. As Donald Trump’s coronavirus testing tsar, he is repeatedly grilled by America’s top political news hosts about what is seen as an epic disaster. And despite his gilded career at school, Giroir’s qualifications and track record have come under increasing scrutiny as the US pandemic death toll tops 150,000.

“What he does over and over again in his public statements is always put the most positive spin he can on what is clearly just an abysmal failure in terms of the US testing strategy,” said Jeremy Konyndyk, who led the government response to international disasters at USAid from 2013 to 2017.

Related: More than 150,000 Americans have died from Covid-19. Here is that tragic story in figures

Now 59 years old, Giroir spent his childhood in a small town outside New Orleans, the son of an oilfield worker and police officer. “Growing up, I had significant hearing problems and hearing loss, and there was no ENT physician in my small hometown; we had to drive 30 miles to the city to see a specialist,” he told Texas Medical Center News online in 2014.

Success on the debate team meant touring universities, including Harvard, where he won a place to study biology before gaining a medical doctorate from the University of Texas Southwestern medical center. Giroir began his career as a pediatrician in Texas and became the head of Children’s medical center Dallas.

After a spell at the Pentagon’s Defense Advanced Research Projects Agency, Giroir returned to Texas in 2008 and went on to become the chief executive of Texas A&M University’s Health Science Center. But his ambitions to turn it into a world-leading, billion-dose-per-month vaccine facility were abruptly halted.

In 2015, Giroir was told that he had 30 minutes to resign rather than being fired, the Washington Post reported, after an annual performance review said he was “more interested in promoting yourself” and fared poorly as a “team player”.

Giroir has since claimed he was the victim of university politics. “If you’re not familiar with academic politics, it makes politics in Washington look like a minor league scrimmage,” he told the Post in April this year, adding that he was “heartbroken” to be forced out before his work on vaccines was complete.

Others interviewed by the Washington Post told a different story. Robin Robinson, who as the director of the federal Biological Advanced Research and Development Authority oversaw a major grant for the Texas vaccine project, was quoted as saying that Giroir “over-promised and under-delivered”.

He added: “I always had a good relationship with Brett. I know he has a temper and he sometimes has a very difficult time controlling it.”

In 2017, Trump picked Giroir to be the assistant secretary for health at the Department of Health and Human Services, making him the top medical and science adviser to the secretary, Alex Azar. The nomination was held up for months, as Democrats expressed concerns over his commitment to women’s health issues, but eventually confirmed.

Giroir made a positive first impression on some in Washington. Stephen Morrison, a senior vice-president at the Center for Strategic and International Studies (CSIS) thinktank, and the director of its Global Health Policy Center, recalls talking to him about a Trump administration initiative on domestic HIV/Aids.

“He came across to me as very authentic in his compassion about populations that are stigmatised, marginalised, highly vulnerable to HIV in the United States. Some of them were public sessions, many of them were by-invitation private discussions, and so there would inevitably be people in the room who actively loathed anything the Trump administration did but were struck by his seriousness and his compassion and his genuine desire to make a difference and do something well.

“I think the general opinion of him was pretty high here in town and people had a lot of respect for him and took him quite seriously.”

Giroir also leads initiatives on physical activity guidelines, sickle cell disease and opioid policy, and has been criticised by Senate Democrats over his failure to acknowledge the role of drug companies in the opioid epidemic.

But it is the coronavirus that delivered the defining moment of his career or, perhaps, some would say, a poisoned chalice. In early March, Trump claimed that “anybody that wants a test can get a test” despite a massive shortage of testing kits. A week later, on 13 March, Giroir was put in charge of overseeing the federal government’s testing efforts – a relatively unknown choice for a monumental position.

Since then, critics argue, America’s testing has been a historic catastrophe that has allowed the virus to rage like a forest fire. The number of tests performed has surged to more than 50m and last Sunday, on CNN’s State of the Union, Giroir claimed that anyone who “needs” a test can get one. But getting test results is a different matter: shortages of chemicals and plastic pipette tips can mean it takes up to two weeks for laboratories to turn them around, rendering them practically useless.

Konyndyk, a senior policy fellow at the Center for Global Development thinktank in Washington, said: “The fundamental thing that’s gone wrong is the federal government has not taken ownership of the problem and has not taken ownership of fixing it. Ultimately, that is much more the president’s decision than it is Brett Giroir’s but Brett Giroir is willingly facilitating and enabling it.

“It’s a failed policy so he owns it. He’s not saying we’re failing, he’s not saying we need a different approach, he’s continuing to work on an approach that at this point you just have to say is manifestly failed. We’re moving backward on testing. Delays are getting longer.”

Public health officials have had to navigate treacherous waters in Trump’s White House. Anthony Fauci, the director of the National Institute of Allergy and Infectious Diseases, has a reputation as a blunt truth-teller and duly found his media appearances curtailed; until recently, he said, he had not briefed Trump for two months. By contrast, Deborah Birx, the coronavirus taskforce coordinator, was recently described by the New York Times as “the chief evangelist for the idea that the threat from the virus was fading”.

Giroir, who has appeared alongside Trump in the admiral’s uniform he is entitled to wear as head of the US Health Service Commissioned Corps, appears to fall more in the Birx camp when it comes to placating the president.

Konyndyk added: “The responsibility of a scientist in the kind of role that he is in is not to just share the political spin that’s favourable to the president. It’s to give the president and, frankly, give the public an honest, science-based, evidence-based perspective on what’s needed, and that’s not what Giroir is doing and, frankly, it’s not what Birx has been doing.

“I do fault him for that and I also recognise that in time if he were to do that, I’m sure he would not still be in that role. That’s the quandary that any high-profile scientist in the government is caught in: if you spin, you maintain your access; if you tell the truth, you risk being marginalised. You see one approach to that from Dr Fauci and you see a different approach to that from Drs Birx and Giroir.”

Giroir finds himself working for a president who has claimed that testing is “overrated” and boasted at a campaign rally that he has asked for testing to be slowed down because it makes America look bad. Many experts suggest the biggest failing from the beginning is the lack of national testing strategy, leaving state governors to sink or swim on their own. It will cast a long shadow over Giroir’s career.

Zac Petkanas, the coronavirus war room director of Protect Our Care, a healthcare advocacy group, said: “On Sunday he went out there and had the audacity to say that everybody who needs a test can get a test. This is just patently baloney. Sure, a number of people can obtain tests, but then they have to wait 10 to 20 days to get results back, making the tests essentially worthless.”

Petkanas added: “Giroir is clearly nothing more than a water carrier for Trump administration policies and Americans are paying the price because he won’t stand up to the administration and do the right thing, and that is to say that we need a federal national testing infrastructure that does not pit states against each other and coordinates this response so that all the states can get the materials they need when they need them and people can get tested.”

Does the Covid pandemic spell the end of public schools?

Fri Jul 31 , 2020
We might be entering the last days of public education in America. The United States, which led the world in expanding access to public education to boys and girls in the 1800s, is poised to become the first rich nation to abandon that commitment as longstanding political efforts to undermine […] 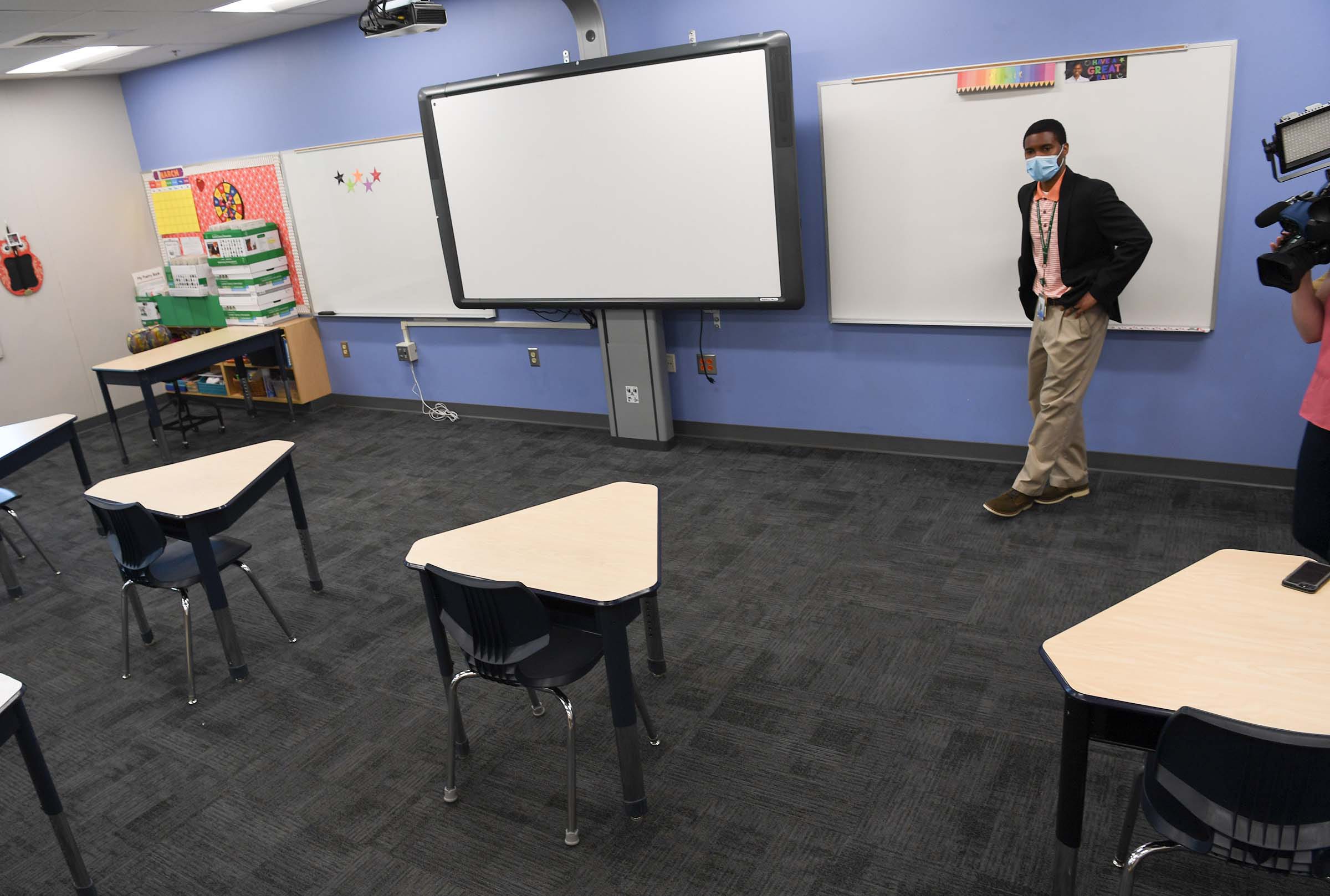