Detractors say Carlson’s show has helped bring xenophobic and misogynist views into mainstream political commentary — such as his 2018 assertion that immigration in some instances has made America “dirtier.” Last month, Fox News Channel fired Carlson producer Blake Neff for making racist and homophobic statements under an online pseudonym that Fox News CEO Suzanne Scott decried in a memo as “abhorrent.”

Media Matters for America, one of the advocacy groups that wages organized campaigns to draw attention to Carlson’s critiques and pressure advertisers, said last month that Carlson’s on-air response to the Black Lives Matter movement has been an effort to “radicalize his audience against those advocating for racial justice.” The group accuses him of covering the mass wave of protests “in extreme and deliberately misleading ways.”

Since joining Fox News Channel’s primetime lineup in 2017, “Tucker Carlson Tonight”  has built a bigger audience than the one commanded by his time-slot predecessor, Bill O’Reilly, despite the fragmentation of the era. “Tucker Carlson Tonight” won an average of 4.33 million viewers in the second quarter of 2020 – a record cable-news audience for any quarter. While that figure doesn’t top that of a broadcast evening-news program (the lowest-rated one, “CBS Evening News,” recently reached an average of 5.26 million), it represents significant growth.

In its final year, “The O’Reilly Factor,” which Carlson’s show eventually replaced after longtime Fox News host Bill O’Reilly was fired in 2016 amid outrage over sexual harassment allegations, captured an average of more than 3.29 million viewers. Carlson’s viewership in 2020 is up 26% over that figure. Last week, Carlson drew more viewers in the adults 18-49 demographic than an NBA game on WarnerMedia’s TNT.

Carlson is one of the few cable news stars who has worked at each of the Big Three news outlets over his career to date. At CNN in the early 2000s, Frank Sesno, director of strategic initiatives at the George Washington University School of Media and Public Affairs and a former Washington Bureau chief at CNN, recalls paring Carlson with former Time columnist Margaret Carlson (no relation). Soon, Tucker Carlson was assigned to “Crossfire” until the show’s end in 2005. From 2005 to 2008, he hosted “Tucker” for MSNBC, a program on which a young Rachel Maddow gained some of her first on-air experience. In 2010, Carlson founded the political news website the Daily Caller with former Dick Cheney advisor Neil Patel.

In a different era, a top-rated broadcaster tended to unify viewers, not divide them. Walter Cronkite never had the detractors that Carlson does, nor did Johnny Carson. Thanks to the fragmentation of audiences along everything from political views to pastimes, crowds can tune in what they want — and huddle around a figure who best suits their specific interests.

“Tucker both magnifies and reflects the changes in media, politics and culture we have experienced in this country over the last 20 to 30 years,” says Sesno. He sees Carlson’s ratings success as emblematic of “this deeply polarized public and this moment in time when outrage and grievance and suspicion gain instant traction in the public square.”

Carlson isn’t impressed by anchors such as CNN’s Chris Cuomo or Don Lemon, or MSNBC’s Nicolle Wallace. But he holds Maddow in some regard. “Rachel does what Rachel thinks is right,” he says. “If Rachel is interested in something, she will lead with it, whether it’s in the news or not. Rachel decides what she thinks is important, and I think that is just a great quality.”

Carlson has grown his electronic bully pulpit even as he spurs outrage by making offensive statements such as his recent comments on Sen. Tammy Duckworth (D-Ill.). The New York Times last month described the disparaging words Carlson used to describe Duckworth as “nativist smears.”

The language Carlson uses “brings this type of rhetoric that was once on the fringes, or should be on the fringes” into the mainstream, says Michael Edison Hayden, senior investigative reporter for the Southern Poverty Law Center, a nonprofit advocacy organization in Montgomery, Ala., that studies and advocates for racial justice. Carlson has criticized the organization on his show.

The constant scrutiny of his program has taken a personal toll, Carlson says.

“There’s a very high cost. It would be a lot easier for me to mouth the same mindless platitudes” embraced by other pundits, he says. “I’ve been rewarded for that with our viewership, but I’ve also lived with the consequences, which are very negative. I knew that going in.”

Carlson says this hours before he generated fresh condemnation for a segment on his Aug. 11 broadcast where he mispronounced — and dismissed his guest’s effort to correct — the first name of Sen. Kamala Harris (D-Calif.), who earlier in the day had been tapped for the VP slot by presumptive Democratic presidential nominee Joe Biden.

In a later interview, Carlson says the criticisms were “ridiculous” and he stresses that he feels no need to show deference to Harris or any other politician. “I have a constitutional right to my own views about this person, and I have a moral obligation as a journalist to say what I think is true.”

Carlson believes people are coming to him to hear things they won’t get from other hosts who tend to “say very obvious things that are not particularly insightful.” Carlson says he simply tries to call things as he seems them — a vision that many believe is skewed by bigotry — and that he has more in common with liberals that people might think.

“I don’t think I’m particularly insightful – I’m a talk show host, not a philosopher – but I’m in a position where I can say what I think is true, which used to be universal, and no longer is,” Carlson says. He emphasizes that he doesn’t always toe the conservative line. Carlson has argued with President Trump’s policies on occasion, calling him out in March for not paying more attention to the pandemic and in June for not acting more forcefully to quell protests over the killing of George Floyd.

“I disagree with what he wrote on the internet. I told him that. I told our viewers that,” Carlson says of Neff. He emphasizes that he always has the final say on what is included on his program, noting that “every word that comes out of my mouth is mine, no matter whether it’s in the script or not.” He adds: “I’m responsible for what’s on my show. If you don’t like it, blame me.”

Asked if he spreads inflammatory views or is biased against people of color, Carlson says he believes “all people are equal in the eyes of God and the U.S. government.”

Carlson would like to spend more time in the days before the presidential election in November examining Google’s growing dominance, how the nation is handling the coronavirus pandemic, what’s happening in China and even what the U.S. government knows about UFOs. But he points to looting and violence in Chicago earlier in August as an example of what he believes the protest movement sparked by the death of George Floyd has led to violence and crime in some cities, and he feels a need to continue to call attention to it.

“As long as that is going on, it’s very hard to focus on anything else. I would like to, but that’s just the deal killer,” he says. He is not deterred by the comments of David Brown, Chicago Police Superintendent, who told the Washington Post that the looting and legitimate protests in the city on Aug. 10 were distinct incidents. The looting “was not an organized protest. This was an act of pure criminality,” Brown told the Post.

Cable TV can be a fraught venue for such discussions, says Sherri Williams, an assistant professor of race, media and communication at American University, particularly in the current national moment. “There is attention being paid to how we talk about people and how they are represented and, really, an interrogation of if it’s fair,” she says.

Carlson refuses to apologize when asked about his recent on-air slam of Duckworth, after the senator expressed on CNN that it was worth having a discussion about removing monuments to George Washington because the founding father was a slave owner. Carlson responded by calling her a a “vandal” and a “moron” and asserted that she must “hate America” to entertain such an idea about tributes to Washington. Duckworth, who lost both of her legs fighting with U.S. military in Iraq in 2004, tweeted that Carlson should “walk a mile in my legs and then tell me whether or not I love America.”

The host says that he is doing the job for which he was hired.

“My job is to hold the powerful to account. Senator Duckworth is a U.S. senator. I didn’t attack her family. I attacked what she said. That is entirely within bounds,” he says. “No one in the media should allow any U.S. senator or any president or any former president or anybody else weighing in on how the country is governed – nobody gets a pass.”

Carlson reiterates that he is fortunate to have “the support of the Murdochs,” namely Rupert Murdoch and his son, Lachlan Murdoch, who run Fox News Channel parent Fox Corp., despite the fact that his nightly hour of TV is hard for Fox to monetize. “Trust me, it’s a constant assault. It’s a never-ending effort to take us off the air,” he says.

Why You Need a Roth IRA

Wed Aug 19 , 2020
One of the smartest money moves a young person can make is to invest in a Roth IRA — and setting one up is easy. Follow the rules, and any money you put into one of these retirement-savings accounts grows absolutely tax free: You won’t owe Uncle Sam a dime […] 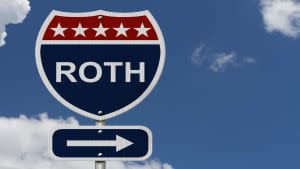