The Trump administration has thrown colleges and universities across the country into confusion this week with the unexpected announcement that international students will have to leave the U.S. if their school does not offer in-person classes during the upcoming semester.

In a press release Monday afternoon, U.S. Immigration and Customs Enforcement announced that, under a forthcoming temporary rule, foreign students currently attending a school that plans to operate entirely online during the fall semester will either have to transfer to a different school offering in-person classes, leave the country voluntarily or face possible deportation.

In addition, ICE said the State Department “will not issue visas to students enrolled in schools and/or programs that are fully online for the fall semester nor will U.S. Customs and Border Protection permit these students to enter the United States.”

Under normal circumstances, the U.S. does not grant student visas to people enrolled in online-only courses, and preexisting rules require that those in the U.S. on certain student visas must attend most of their classes in person. But in March, as soaring coronavirus cases led President Trump to declare a national emergency and prompted schools across the country to close their campuses, ICE issued a temporary exception to this rule, allowing foreign students who were already in the country to transition to remote learning along with their peers without losing their visa status. The provision, which ICE made clear was “only in effect for the duration of the emergency,” allowed foreign students to continue their normal course load online through the spring and summer semesters.

Despite reports that Trump has recently considered lifting the national emergency declarations issued in response to the coronavirus, the White House has announced no such action. And while ICE’s Monday press release referred to the temporary visa exemption instituted “during the COVID-19 emergency,” coronavirus infections continue to climb, with several areas of the country reporting record numbers of new infections. As of Wednesday, the total number of confirmed cases in the U.S. had surpassed 3 million, with more than 132,000 deaths nationwide, according to the latest data from Johns Hopkins University.

It is against this backdrop that colleges and universities have been working to develop individual plans for how and when to resume classes this fall — many of which had just been announced or were being finalized when ICE issued its new policy regarding foreign students on Monday. Although, according to the Chronicle of Higher Education, a majority of schools that serve undergraduates have indicated that they plan to resume classes this fall either in person or under a hybrid of online and in-person courses, a number of schools, including all 23 campuses of California State University, the country’s largest four-year public university system, as well as the University of Southern California, had announced that fall semester classes would be held almost exclusively online. On Monday, shortly before ICE revealed its new policy for the coming semester, Princeton, Georgetown, Rutgers and Harvard Universities announced their own plans for a primarily remote fall term.

Under the new ICE directive, students with certain visas must be enrolled in at least one in-person course this fall in order to enter the U.S. or remain in the country.

ICE’s announcement was immediately met with confusion and condemnation, with the president of the Association of American Universities calling it “immensely misguided and deeply cruel.” By Wednesday morning, the policy had become the subject of a federal lawsuit filed in the U.S. District Court for Massachusetts by Harvard and the Massachusetts Institute of Technology. The suit states that “ICE’s action proceeded without any indication of having considered the health of students, faculty, university staff, or communities … or the absence of other options for universities to provide their curricula to many of their international students” and calls for a temporary restraining order to prohibit the government from enforcing this policy. It also charges that the ICE policy is “designed to force universities to conduct in-person classes,” citing comments made by Ken Cuccinelli, the acting deputy secretary of homeland security, during an interview with CNN Tuesday in which he said that the ICE directive will help “encourage schools to reopen.”

President Trump is also insisting that public-school districts must reopen in full and on their regular schedules this fall, over the objections of teachers’ unions and in conflict with the plans of New York City’s Board of Education to resume classes on a split-week schedule.

The lawsuit notes that “the procedures and responsibilities” for implementing the ICE rule had not yet been published in the Federal Register, a required step in issuing new regulations. In fact, during the same CNN appearance Tuesday, Cuccinelli made repeated references to the fact that the temporary rule “remains to be completely finalized.”

It’s unclear how the lawsuit will affect other universities and the more than 1 million international students who were enrolled in them as of the last academic year.

In the meantime, school administrators are scrambling to provide answers and reassurance to their students, which in some cases may involve revising their plans for the fall semester. In a letter sent to students on Wednesday and provided to Yahoo News, the University of Southern California’s president and other administrators wrote that “we are strongly advocating against this policy and are working closely and collaboratively with higher education colleagues across the nation.

“Given the broad range of courses being offered, both in person and online, we are optimistic we will be able to support our international students to study in person safely if they wish, but it may take a few days,” the letter said.

USC had announced on July 1 that the school was “recommending all undergraduates take their courses online, and reconsider living on or close to campus this semester.” The more recent email to students suggests USC administrators may be working to revise their fall plan, which originally envisaged a primarily internet-based course load for undergraduates, to offer more in-person options.

“We understand that you have many time-sensitive decisions,” reads the president’s letter. “We will write soon with more details and options, and appreciate your patience.”

A spokesperson for the University of California, Irvine, which had also previously planned for most undergraduate classes to take place online this fall, provided Yahoo News with the latest communication sent to students, noting that “campus officials continue to have discussions on the topic.” In an email sent Tuesday, the school’s vice chancellor for student affairs wrote that “our campus and the University of California will do all that we can to support our students while complying with these changes and minimizing student disruption.” The email links to a relatively vague statement issued earlier Tuesday by University of California president Janet Napolitano, in which she denounced the new ICE rules and said simply that “UC will assess fully how these changes will affect our campuses and our international students.”

While emphasizing that “this is an evolving situation, subject to change,” the vice chancellor’s email to students suggests that the school does not expect to be able to satisfy the new ICE requirements for in-person courses in time for the fall semester, at least for students who are not currently in the U.S. Instead, “UCI anticipates working with new incoming international students to allow them to start remotely and make progress toward their degrees.

A number of professors, including from USC and UC Irvine, have tweeted personal offers to conduct in-person, independent study courses for students who may now be at risk of losing their visa.

A report published Wednesday by the Chronicle of Higher Education emphasizes that the new ICE rules aren’t just causing chaos for schools that had planned for a remote fall semester.

“Even institutions that plan to offer a mix of online and in-person courses are scrambling to ensure that there are enough face-to-face courses for international students to meet the requirements of the new policy,” the report reads. It also notes that “under the policy’s provisions, colleges planning to operate in a hybrid mode … must update their plans with the Department of Homeland Security by the beginning of August and issue new student-visa documents known as I-20s to every student, certifying that the student is not taking an entirely online course load.” This imposes an enormous logistical undertaking, particularly for schools with large numbers of foreign students.

A statement issued Tuesday by Andrew Hamilton, the president of New York University, which is home to 17,000 international students — the largest number of any university in the country — seems to capture the uncertainty and confusion administrators are experiencing even as they seek to reassure their international students. While he vows to urge federal officials to “revoke or modify this rule” and promises to work with “any affected students so they can continue their studies in the United States,” Hamilton’s statement basically admits that he is not exactly sure how the school’s international students will be affected by the new policy.

Because “NYU’s hybrid program for fall comprises both in-person and remote learning options,” he suggests that “these new regulations may not affect many of our international students but will be disruptive to some who will now be forced to rethink their fall schedules to ensure they include live classes.”

In a letter posted online Tuesday, the director of International Student & Scholar Services for the University of Massachusetts-Amherst (which planned to offer “all courses that do not require physical presence on campus” remotely this fall) urged international students to tune out “the overwhelming amount of online information and conversation” about the new ICE policy and implored them not to “make any sudden or hasty decisions regarding your program of study.” Monday’s announcement “is very much subject to change,” the letter noted.

Andrea Flores, an immigration policy expert who serves as the deputy director of policy at the ACLU, called the new ICE rules “enormously cruel” and “beyond disruptive for universities and students alike.”

“The administration is putting schools in a really impossible position [where] you either bring everyone back, risk making some people unsafe simply by forcing in-person classes, or say to the university, ‘We will deport your students unless you comply,’” she said. “The fact that universities now have to worry about students being deported or students not being let into the country is one extra thing that they are dealing with as they’re responding to this pandemic.”

Flores said that foreign students are just the latest casualty of “Trump’s anti-immigrant crusade,” referring to a number of sweeping new immigration-related restrictions that the administration has introduced since the start of the pandemic, affecting foreign workers and asylum seekers, among many others.

“The ACLU has called on Congress to investigate all of these COVID immigration policy changes, because behind all of them is just a consistent attempt to dismantle our entire immigration system as we know it,” she said.

Thu Jul 9 , 2020
(Bloomberg) — The University of California knows it faces significant repercussions from the coronavirus pandemic — though it can’t say how extensive. Yet it didn’t have any trouble borrowing money from Wall Street. The system sold $2.3 billion in revenue bonds Thursday, its first sale since California, dealing with its […] 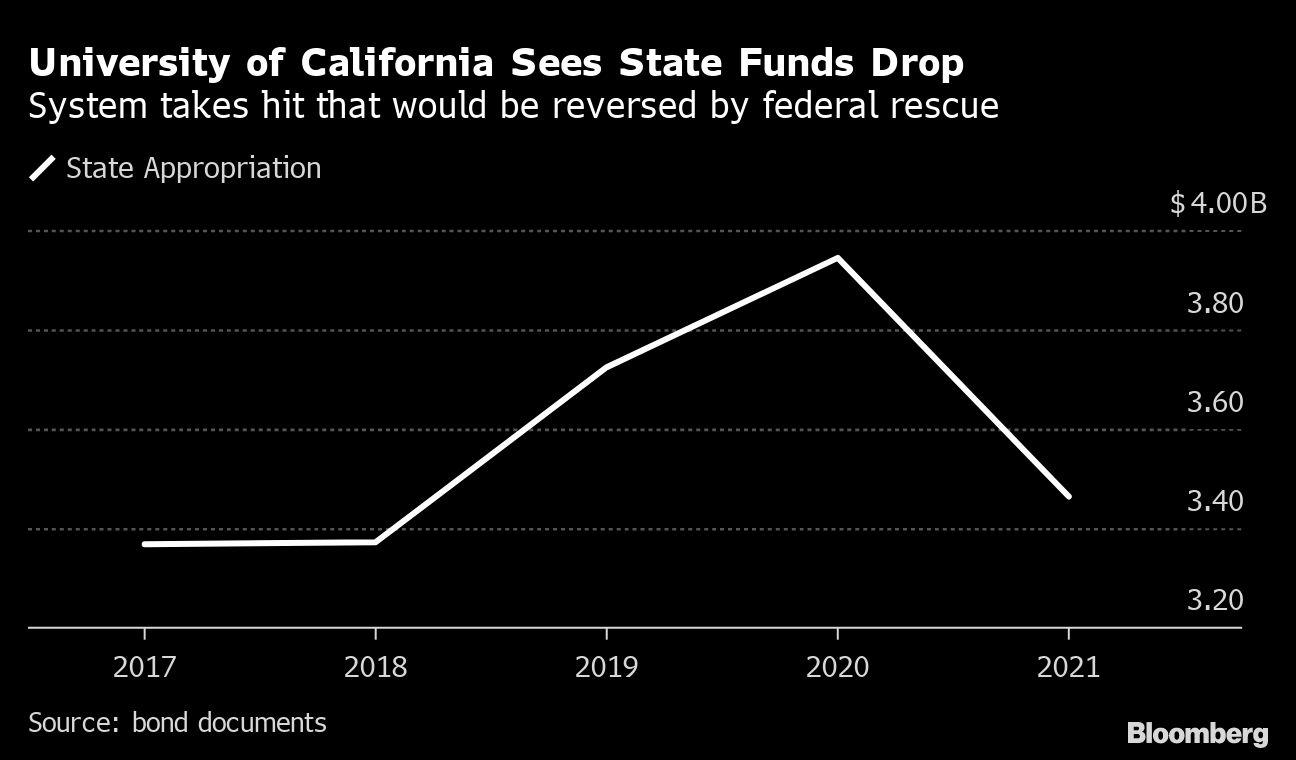