President Donald Trump’s decision to unilaterally act on the pandemic-driven recession by with executive orders drew scalding criticism from House Speaker Nancy Pelosi on Sunday as the U.S. reached another historic milestone by surpassing 5 million cases.

The U.S. home to about one-quarter of cases reported worldwide. And our numbers continue to roar higher: More than 56,000 new U.S. cases were reported Sunday, with more than 1,000 deaths. More than 162,000 Americans have died in little more than six months.

All this as the world neared 20 million cases, a number experts widely believe is underreported due to insufficient testing.

Trump, unable to cut a deal with Congress on a new $1 trillion stimulus package, signed an executive order and issued three memorandums Saturday. One would provide an additional $400 per week in unemployment benefits to millions of out-of-work Americans. Pelosi dismissed the package as an “illusion” and “constitutional slop.”

📰 What we’re reading: Ohio Gov. Mike DeWine tested positive, then negative for COVID-19. That underscores how not all tests work the same way, nor do they always provide identical results. Even the same test taken twice can show contradictory outcomes. Here’s answers to common questions on the subject.

House Speaker Nancy Pelosi, D-Calif., on Sunday slammed President Donald Trump’s executive orders to extend some financial pandemic assistance to Americans as “an illusion.” Pelosi, making the Sunday morning news show rounds, said Trump’s payroll tax break would actually undermine Social Security and Medicare. And a plan to replace a $600 weekly jobless bonus with a $400 bonus is too complicated and won’t reach the needy for weeks, Pelosi said. She said Trump’s executive order and other measures are not legal.

“What the president did is … unconstitutional slop,” Pelosi said.

Access to testing, quick results for all key to ending pandemic

Federal officials and private labs acknowledge they must prioritize the nation’s limited supply of coronavirus tests and labs for hospitalized patients, health care workers and other high-risk individuals. Teachers, students and others who rely on traditional retail clinics or doctors’ offices, however, might wait days or weeks for results.

“Some privileged parts of our country are getting daily access and others have no access at all,” Koh said. “We’re never going to solve this pandemic until we give everybody access, particularly high-risk groups. That’s the public health principle we always try to follow.

Some schools may not notify parents of infection outbreaks

Thousands of American parents have already sent their children back to the classroom and millions more will soon join them amid fears about whether they’ll even be notified when coronavirus hits their campuses. Reporting by the USA TODAY Network also found little consistency in how schools and health departments plan to coordinate information and what, if anything, they will tell the broader public. Many of these gatekeepers have pointed to medical and educational privacy laws as reasons to withhold even basic counts of coronavirus cases.

“It’s totally proper for schools to be telling parents the number of cases,”  said Florida attorney Frank LoMonte, “and even, in exceptional cases, to reveal details about the individual afflicted student if there has been close physical contact, if that information is necessary for the health of others.”

The U.S. surpassed 5 million confirmed cases of COVID-19, just 17 days after reaching 4 million cases. Last week, President Donald Trump once again said the U.S. has the virus “under control,” describing his administration’s response to the pandemic as “incredible” in an interview with Axios aired Aug. 3 on HBO. This despite an average daily death toll hovering around 1,000, with almost 60,000 new cases being reported daily.

Trump’s recurring theme has been the high number of cases in the U.S. is due to the high rate of testing. Ominous hospitalizations and deaths rates, however, are not a function of testing.

Speaking from his golf resort in Bedminster, New Jersey, Trump said his orders would provide an additional $400 per week in unemployment benefits, which is $200 less than the supplemental benefit that expired at the end of July. Trump said he also would suspend payments on some student loans through the end of the year, protect renters from being evicted from their homes, and instruct employers to defer certain payroll taxes through the end of the year for Americans who earn less than $100,000 annually.

It was not immediately clear if he has the power to issue such an order while sidestepping Congress. Trump said he decided to act on his own and order the benefits after two weeks of negotiations with congressional Democrats collapsed without an agreement on a new coronavirus relief package.

Brazil is now the second country with 3 million cases and also the second country to report 100,000 deaths, Johns Hopkins reports. A USA TODAY analysis of Johns Hopkins data through late Saturday shows three states set records for new cases in a week while two states had a record number of deaths in a week. New case records were set in Hawaii, Indiana and Virginia. Record numbers of deaths were reported in Arkansas and Nevada, and also Puerto Rico.

Nearly 250 students at Georgia school district quarantined after one week

After only one week of school, more than 250 students and teachers from one Georgia school district will be quarantined for two weeks after several teachers and students tested positive for COVID-19, according to the district’s website.

Cherokee County School District, north of Atlanta, is sharing regular updates on coronavirus cases in its schools on its website. The district has more than 42,000 students. As of Friday, at least 11 students, ranging in age from first to 12th grade, and two staff members, from various elementary, middle and high schools, have tested positive for coronavirus, prompting the quarantine order for almost 250 students and staff. The students will receive online instruction during the period.

The Mid-American Conference, facing significant financial losses without the ability to play more than a handful of non-conference games against Power Five opponents this season, became the first Football Bowl Subdivision conference to cancel its fall season on Saturday, a person with knowledge of the situation told USA TODAY Sports. The person spoke on the condition of anonymity because the league had not yet made an announcement. Besides a small slice of TV revenue, MAC schools depend on money from football game guarantees, which amount to appearance fees to play big conference schools. MAC schools stood to make $10.5 million alone this season from non-conference games against the Big Ten.

But with the SEC and notably the Big Ten deciding to play only within their conference, MAC’s only Power Five games were Buffalo at Kansas State, Ball State at Iowa State, Miami at Pitt, Ohio at Boston College and Western Michigan at Notre Dame.

Prevalence of depression among college students increased since the pandemic caused the closure of campuses this spring compared to fall 2019, according to a survey of 18,000 college students published by the Healthy Minds Network on July 9. And of the nearly 42% of students who sought mental health care during the pandemic, 60% said it was either much more or somewhat more difficult to access care.

Mental health among young people has been worsening for years. A 2019 analysis of teens reported 13% of U.S. teens ages 12 to 17 said in 2017 they had experienced at least one major depressive episode in the past year, up from 8% in 2007.

21-year-old recovers from mild case, then his organs fail

A 21-year-old from Florida is warning of potential long-term virus complications after his mild case turned nearly fatal. Two weeks after Spencer Rollyson tested negative and returned to work, he started suffering from an array of symptoms. His fever eventually reached 103.4 degrees — and Rollyson fell unconscious in the middle of a June 15 telehealth appointment.

Doctors diagnosed Rollyson with multi-organ failure with heart failure, acute respiratory failure, and severe sepsis with septic shock. “I thought I was going to die. I was literally sitting in the hospital like, ‘I’m going to die,’ ” Rollyson recalled.

It’s yet another puzzling example of how the virus can damage the body in unpredictable ways. For example, two German studies published last week found heart abnormalities in COVID-19 patients months after they had recovered from the disease

No masks required as 250,000 expected at Sturgis bike rally

One of the largest events since the beginning of the pandemic has begun in South Dakota: More than 250,000 people are expected at the iconic Sturgis Motorcycle Rally. That’s scaled down from previous years, where about half a million people have descended on the city of about 7,000 for an event that has developed a reputation as an anything-goes festival.

While the 80-year tradition isn’t as raucous as it once was, festivalgoers will be largely free of social distancing restrictions common elsewhere in the country during this year’s 10-day festival. Masks are encouraged, but not required.

'I Worked Hard and It Feels Good'

Sun Aug 9 , 2020
Kelly Osbourne/Instagram Kelly Osbourne Kelly Osbourne is opening up about her weight loss journey. After posting a glam selfie last week, in which the reality TV star, 35, styled her purple locks into a chic updo and shared a glimpse at her outfit of the day, The Real co-host Jeannie […] 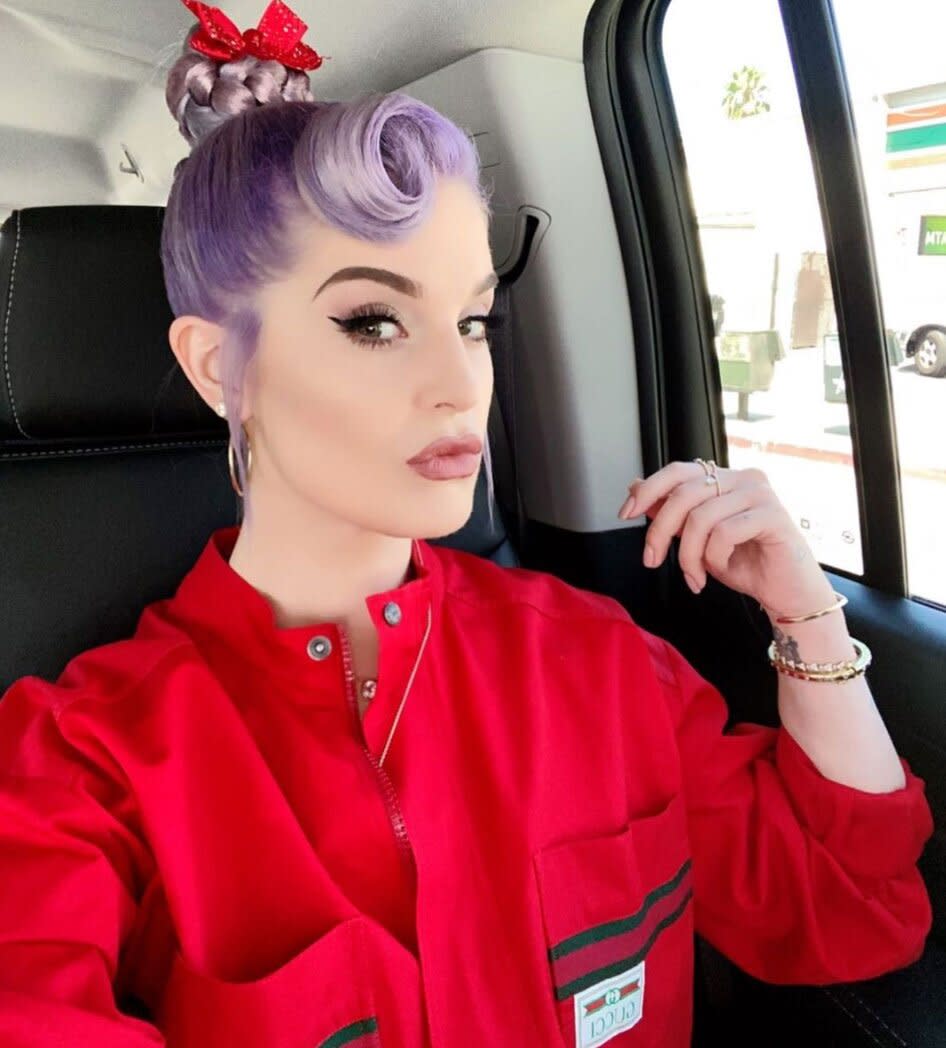