More than 130,000 Americans have died from COVID-19, a novel strain of coronavirus, and cases continue to surge in communities across the country. But for front-line medical workers, particularly those working in emergency rooms and treating COVID-19 patients, the fight has only just begun.

While the Centers for Disease Control and Prevention (CDC) estimates that at least 515 healthcare workers have died so far after contracting COVID-19 – with 34 percent of cases still unreported – a larger, potentially even more deadly crisis is looming. For doctors, nurses, hospital cleaners, and other staff members on the front lines – nearly 80 percent of whom are women, according to the US Bureau of Labor and Statistics – it’s their mental health that has been devastated, and this country is beyond ill-equipped to help them repair it.

“Trauma does not have a timeline, so we will be seeing the ramifications from this for a while and need to be prepared to step up and help in the long run,” Jessi Gold, MD, an assistant professor in the department of psychiatry at Washington University in St. Louis, told POPSUGAR. Dr. Gold explained that physicians and other healthcare workers already faced unique challenges, but she expects that “we will see more burnout, depression, anxiety, substance use, and PTSD. I think we will see people leave medicine or have trouble returning to work because of it.”

Prior to COVID-19, physicians were already at a higher risk of suicide. A 2019 analysis found that female physicians and those making life and death decisions may be particularly vulnerable.

Prior to COVID-19, physicians were already at a higher risk of suicide. A 2019 analysis published in PLos One found that female physicians and those making life and death decisions may be particularly vulnerable, and all medical workers would benefit from preventative strategies implemented in the workplace. It’s estimated that anywhere from 10 to 15 percent of physicians suffer from substance abuse, according to a 2007 study published in Critical Care Medicine.

But COVID-19 has exacerbated these risks. One emergency room doctor in New York City, Lorna Breen, died by suicide after treating COVID-19 patients and recovering from COVID-19 herself. “She went down in the trenches and was killed by the enemy on the front line,” Philip Breen, Lorna’s father, told CNN. “She loved New York and wouldn’t hear about living anywhere else. She loved her coworkers and did what she could for them.”

Related: Two of My Closest Friends Are Healthcare Workers, and I’m Asking You to Protect Them

LJ Punch, MD, a trauma surgeon in St. Louis, MO, has also been fighting in the trenches. “The first wave of COVID-19 was like a flood. I felt like I was both underwater and at the same time well prepared to swim,” Dr. Punch told POPSUGAR. But eventually, the work began to take a toll. “Taking care of room after room of ICU patients behind isolation walls and separated from their families was emotionally taxing. Having complex conversations over the phone about life and death decisions that would typically occur in person – where families could feel and touch their loved one – was difficult, frustrating, and sometimes really sad,” Dr. Punch said. “It felt like we were all floating, unable to ascend to the surface to breathe.”

“It felt like we were all floating, unable to ascend to the surface to breathe,” Dr. Punch said.

Dr. Punch first realized they wanted to pursue a career in medicine after surviving a suicide attempt their freshman year of college. That near-tragedy, coupled with the evolution of their gender identity, made Dr. Punch feel more equipped than most to handle the heartbreak and stress that comes with caring for COVID-19 patients, though they added that as a Black person, the unrest that has emerged during the pandemic is both a relief and “a source of constant tension in my body.” To that end, “I am grateful that I was already connected to a large network of community resources to be able to do that kind of engagement even in the midst of such suffering,” Dr. Punch explained. “I don’t think I would have been as resilient if I was not spending as much time in the community outside of the hospital as I have been.”

Of course, not everyone has community resources available to them, and being a woman, a member of the LGBTQ+ community, or a person of color seeking mental health care presents an entirely new set of challenges.

It’s especially troubling that, for years, women – who now make up such a large portion of the workforce in hospitals – were dismissed as “hysterical” or “emotional” when they were clearly struggling. Dr. Gold told POPSUGAR that she has had patients who didn’t seek help because they thought they were simply too emotional or their mood swings were related to their period. “We very much internalize the messages we hear from others, and it can lead to women not seeking or recognizing the need for help themselves,” Dr. Gold said.

These internalized messages aren’t the only things working against the women fighting COVID-19 on the front lines. There’s also the staggering lack of mental health resources and the prevailing stigma surrounding mental illness. In many cases, women have also been conditioned to prioritize others over themselves. One study published in BMJ found that being a woman and having children increases your psychological risk.

Related: Free Therapy and Mental Health Services You Can Access During the Coronavirus Outbreak

The medical community as a whole doesn’t encourage workers to seek mental health care, either. A 2016 survey of women physicians found that half believed they had a mental illness but did not seek treatment. Fears that they’ll be perceived as weak, lose their medical license, or be judged by their coworkers keep those who need support from seeking it, putting them at greater risk of burnout, substance abuse, and suicide.

“Medicine as a culture is stoic,” Dr. Gold said. “It is modeled by the people who train you, and you learn to ‘suck it up’ and do your work and work the shifts you’re asked to work. You’re asked to sleep less, eat less, keep going (some specialities more than others), and to learn what you need to do and do what you have to do. As such, emotions are not given space or prioritized and, often, not modeled.”

“Medicine as a culture is stoic,” Dr. Gold said. “It is modeled by the people who train you, and you learn to ‘suck it up’ and do your work.”

While the system – medical and social – is not set up to support these frontline workers, there are things we, as a culture and in our own communities, can do to help those who are continuing to treat COVID-19 patients, clean the hospital rooms they’re being treated in, and provide an essential service at a time of so much duress and uncertainty.

“Give them space to feel and validate and support their feelings,” Dr Gold said. “Know the warning signs and actually look for them in your friends who are healthcare workers. Ask them if they’re OK, and point them towards resources.” Some of those resources include forthefrontlines.org, which provides counseling for frontline medical workers, and Project Parachute, a support network for frontline healthcare workers and therapists.

“Also, consider advocating for them to get basic needs, like child care, sick and parental leave, hazard pay, and personal protective equipment,” Dr. Gold continued. “This will make doing their lives and navigating the stressors of their jobs simultaneously easier. This will also protect them and their families, and in turn protect their mental health.” Zero to Three offers an online child care advocacy toolkit, PL+US offers resources and campaigns on advocating for paid sick and family leave, and you can search for your congressional representation online to tell them to pass legislation that will provide hazard pay for frontline medical workers.

In many ways, as a country, we have failed healthcare workers. In New York state alone, it’s estimated that COVID-19 deaths could have been reduced by 80 percent if politicians had acted sooner. We have left these medical professionals with very little to no necessary resources as their emergency rooms have been overwhelmed, and all we’ve done to show our appreciation is label them heroes and shell out money to have the Blue Angels fly over their cities.

What these healthcare workers really need is support – unwavering, tangible support – so they can continue to live healthy lives, both mentally and physically.

Sat Jul 11 , 2020
Photos posted online of a shiny blue bullfrog recently caught in Ohio are raising questions, fueling theories, and prompting at least one person to say, “you know I want to kiss it.” “Lick it…,” Mike Ash commented on the Facebook post. “Rare froggy!” Jesse Shattuck declared. “Are you sure he […] 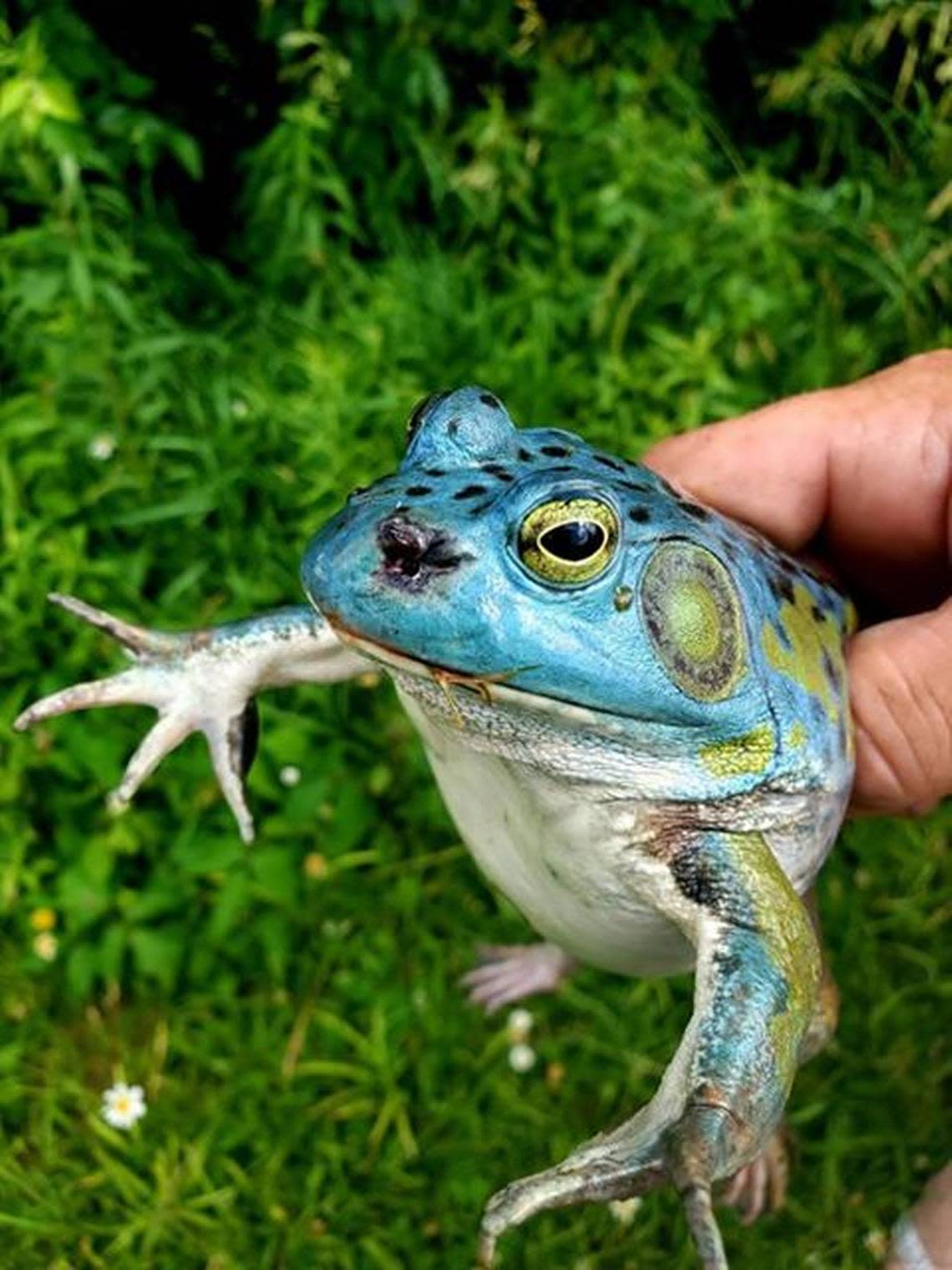