With over 167 million subscribers, Netflix has the power to turn unknowns into superstars virtually overnight — and that’s been the case for the stars of several of the streaming service’s original television series and films. Some Netflix notables had been pursuing acting for years before getting their big break, while others had gotten their start in other industries before gaining small-screen fame.

See what the stars of “Stranger Things,” “You,” “To All the Boys I’ve Loved Before” and more were doing before they were famous.

Uzo Aduba was relatively unknown when she was cast as Suzanne “Crazy Eyes” Warren on “Orange Is the New Black.” Before she got the small-screen role, Aduba was predominantly a stage actress, having starred in several off-Broadway shows as well as the Broadway show “Godspell.”

Penn Badgley’s acting career started long before he appeared as the charming but creepy Joe Goldberg on “You.” You likely remember Badgley as Dan Humphry on “Gossip Girl,” but you might not remember that he played “the other Tucker,” Scott, in “John Tucker Must Die” back in 2006.

Bobby Berk was a successful interior designer by the time he landed on “Queer Eye,” but it had been a long road getting to that point. Berk worked at Bed Bath & Beyond and Restoration Hardware before launching his own company in 2006. In 2015, he launched his full-service interior design practice.

“Queer Eye” star Karamo Brown was no stranger to television when he appeared on the Netflix show. Brown was a cast member on “The Real World: Philadelphia” when he was 22 and worked as a TV host and producer after that.

Titus Burgess was already a star in the theater world when he landed the role of Titus Andromedon in “Unbreakable Kimmy Schmidt,” but the show introduced him to a whole new audience. He even launched his own wine brand as an ode to a popular song he sang on the show.

Ross Bulter was an engineering student at Ohio State University before landing his role on “13 Reasons Why.” Butler told NBC News he pursued the degree to appease his mother but ended up dropping out and moving to Los Angeles to try to make it as an actor.

Comedian and “Nailed It!” host Nicole Byer worked as a waitress and at the retailer Lane Bryant while trying to make it as an actress in New York City, the Daily Beast reported. She got her big break as a commenter on the MTV show “Girl Code.”

Major Pay: Here’s How Much Jennifer Aniston and Other Actors Get Paid for Their Reruns

Netflix can take credit for Noah Centineo’s meteoric rise to fame, which happened seemingly overnight. The actor gained 1 million new Instagram followers after “To All the Boys I’ve Loved Before” began streaming, Seventeen reported. He’s also starred in the Netflix films “Sierra Burgess Is a Loser,” “The Perfect Date” and the “To All the Boys” sequel, “To All the Boys: P.S. I Still Love You.” But Centineo had been in the entertainment business long before his breakout role, working as a child model for the Macy’s catalog and landing a recurring role in the Disney Channel series “Austin & Ally,” CNBC reported.

In addition to playing Yusef Salaam on “When They See Us,” Chris Chalk has landed a number of high-profile acting roles including Clemens in “12 Years a Slave” and Lucius Fox on the TV series “Gotham.” But in between acting gigs, Chalk has worked as a hotel bellman, a doorman and a script reader at auditions, the Greensboro News & Record reported.

She’s now best known as Lara Jean from “To All the Boys I’ve Loved Before” and its sequel, “To All the Boys: P.S. I Still Love You,” but Lana Condor scored her first acting credit in 2016 as Jubilee in “X-Men: Apocalypse.” Previously, Condor was a ballerina, performing with the Alvin Ailey American Dance Theater in New York, the Evening Standard reported. She also used to be a competitive equestrian, she told Just Jared Jr.

Laverne Cox has always loved performing, but her first passion had been dance. She majored in dance at Marymount Manhattan College, but also performed in plays during her time there. During college, Cox performed at nightclub drag shows. She got her first acting role on a major show with an appearance on “Law and Order,” and also starred in the pilot for HBO’s “Bored To Death” and the reality shows “I Wanna Work for Diddy” and “TRANSform Me” before landing her breakout role in “Orange Is the New Black” in 2012.

Natalia Dyer broke out as Nancy Wheeler on “Stranger Things,” but she was a child actress long before making it big on the show. In 2009, she starred in “Hannah Montana: The Movie.”

John Early was trying to make it big as a stand-up comic and online sketch artist when he got a part in Netflix’s “Wet Hot American Summer” revival. He’s gone on to score roles in the TBS comedy “Search Party” and Mindy Kaling’s movie “Late Night.”

Jacob Elordi rose to heartthrob status after starring in Netflix’s “The Kissing Booth” in 2018. He had been pursuing acting before his big break — his first acting gig was as The Cat in the Hat in “Seussical: The Musical,” and his first movie gig was as an extra in “Pirates of the Caribbean” when he was 17, he told Just Jared.

Claire Foy might be TV royalty now, but the star of “The Crown” spent years working the checkout counter at the U.K. supermarket chain Tesco before gaining fame, The Sun reported. She also worked at a bar, did telemarketing, worked as a security officer and was a piano teacher. She studied at the Oxford School of Drama and landed roles on several BBC series before scoring the lead in the Netflix show.

“Queer Eye” fashion guru Tan France studied fashion design and worked for Zara, Selfridges and Shade clothing before launching his own fashion line, Kingdom & State, the Daily Herald reported. He sold the brand at age 33 and actually retired from the fashion world before landing the Netflix gig, Refinery 29 reported.

“Sex Education” star Ncuti Gatwa was homeless for five months before landing his role on the Netflix show, The Big Issue reported. While he was auditioning, Gatwa sold perfume at the department store Harrods to help make ends meet.

Joe Keery — and his hair — became famous as Steve Harrington on “Stranger Things,” but the TV show wasn’t his first foray into the entertainment biz. Keery was previously a commercial actor and has appeared in commercials for KFC and Domino’s, according to TVOM.

Find Out: Celebrities Who Are Not as Rich as You Think

Ellie Kemper had gained some fame in supporting roles on “The Office” and in “Bridesmaids,” but it was “Unbreakable Kimmy Schmidt” that gave her the chance to be a leading lady. Kemper attended Princeton University before trying to make it as an actress, and she worked at a bakery and as a tutor while pursuing improv comedy after graduating, The Muse reported.

“The Kissing Booth” star Joey King became a household name in recent years, but her acting career dates back to age 7 when she appeared in two episodes of “The Suite Life of Zack and Cody.”

Marie Kondo had been tidying long before she was the organizational guru at the center of Netflix’s “Tidying Up With Marie Kondo.” In her book, “The Life-Changing Magic of Tidying Up,” Kondo wrote, “I have spent more than half my life thinking about tidying.” Before writing her bestselling book, Kondo had started a popular organizing consultancy in Tokyo, and before that, she worked as an assistant at a Shinto shrine, The New Yorker reported.

“13 Reasons Why” star Katherine Langford wasn’t sure she wanted to pursue acting as a career — her passions in high school were swimming and musical theater, she told Vanity Fair. While pursuing a degree in musical theater, Langford worked three jobs to help pay her way through school. She was soon signed with a U.S.-based manager, and the rest is history.

“The Perfect Date” star Laura Marano first gained fame on the Disney Channel’s “Austin & Ally,” and she was acting even before that. Marano landed her first TV gig at the age of 8, starring as a recurring character on “Without a Trace.”

“Sugar Rush” host Hunter March started his entertainment career as a coffee-fetching intern at AwesomenessTV. He quickly made the leap to producer, and still produces and stars on the channel. He also hosts “Nightly Pop” on E!

Before starring in “Tall Girl,” Ava Michelle was pursuing dance. In fact, she auditioned to be a part of Abby Lee Miller of “Dance Moms” fame’s studio, but Miller cut her from the team because of her height.

Although Dylan Minnette gained his fame as the star of “13 Reasons Why,” he started acting when he was even younger. Minnette played a hearing-impaired boy named Ryan on season four of “Grey’s Anatomy” back in 2007.

Antoni Porowski had worked in restaurants but had been pursuing acting — not cooking — before starring as a food and wine expert on “Queer Eye,” Refinery 29 reported. He did, however, work as the personal chef of the original “Queer Eye for the Straight Guy” cast member Ted Allen, who encouraged Porowski to audition for the reboot.

Emmy Raver-Lampman got her start on the stage before landing the role of Allison Hargreeves on “The Umbrella Academy.” Raver-Lampman was an ensemble member and understudy on several Broadway shows, including “Hamilton” and “Jekyll & Hyde.”

Before beautifying heroes on “Queer Eye,” Jonathan Van Ness was a successful hairdresser with hair salons in New York City and Los Angeles, Screen Rant reported. He also had gained an online following through his Funny or Die show “Gay of Thrones,” which featured him recapping “Game of Thrones” while cutting hair.

Alisha Wainwright was a scientist before she landed the role of Nicole on “Raising Dion.” Wainwright studied botany at the University of Florida and moved to Panama after graduating to conduct field research, she told W. She planned to eventually pursue a Ph.D., but couldn’t find the funding to study her particular area of interest so she decided to pursue acting instead.

Lena Waithe rose to fame — and earned herself an Emmy — as a writer and star of “Master of None.” The breakthrough had been years in the making — when Waithe first moved to Hollywood, she worked as an assistant to director Gina Prince-Bythewood and later as a production assistant on Ava DuVernay’s “I Will Follow,” Vanity Fair reported. Waithe scored a small role on “The Comeback” before starring in “Master of None” in 2015.

This article originally appeared on GOBankingRates.com: What These 32 Netflix Stars Did Before They Were Famous

Miami public schools return to online learning. What lessons were learned from spring?

Mon Aug 10 , 2020
Reopening Miami-Dade public schools began as a game of “ifs.” If positive cases trend downward for 14 days. If testing for asymptomatic minors becomes widely available and expeditious. If at least 25% of a school’s student body opts to stay home, then the rest can go to the schoolhouse. But […] 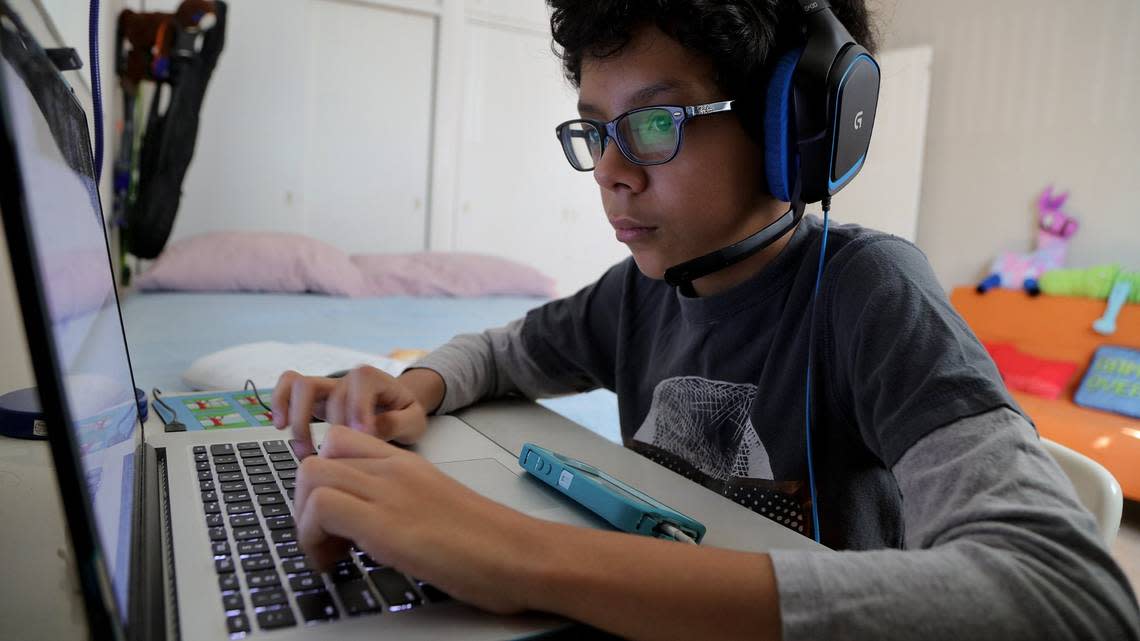