It’s Monday, July 20. Fifty-one years ago today, Apollo 11 landed two men on the moon. Today, the nation is asking its people to follow much simpler science and halt the spread of the coronavirus.

One small step might be to wear a mask. It may also take another shutdown in parts of Florida, where Miami-Dade, Broward and Hillsborough counties represented 41% of new cases in the state last week. And it takes a messaging strategy that persuades.

Our moon shot: We now know three things: mask wearing and social distancing must become the norm, the investment into contact tracing and rapid testing must be done in exponentially higher numbers than they have been in Florida, and government must make available isolation hotels for those who test positive and do not have a place to quarantine.

Let’s take a look at where Florida policy is in that context.

We’re a ‘red zone’: It’s a place you want to be if you’re the Miami Dolphins driving for a score. But it’s also the name the French gave the 500-mile area so damaged by World War I that it was deemed unsuitable for human habitation. And now it is the name a leaked report by the White House Coronavirus Task Force has given Florida.

Florida, the new COVID epicenter, is one of a dozen “red zone” states whose COVID situation is so dire, it should begin implementing more stringent protective measures, according to the report sent to the states but not made public. More stringent measures include closing gyms, which are open in Miami-Dade, requiring masks in retail businesses, closing bars, limiting social gatherings to no more than 10 people, and ensuring safe social distancing. Gov. Ron DeSantis has barely responded, except to say that gyms are where people get healthy and he’s not closing gyms.

So, if you’re the Dolphins in the red zone, that’s a good thing. If you’re a Floridian, it’s pretty scary.

(Speaking of football, take a look at the “I Want a Season” campaign initiated by Ohio Gov. Mike DeWine, whose messaging has been smart and creative. The campaign doesn’t tell anyone to wear a mask. Instead, it informs people that if they wear a mask now they may get a football season this year.)

Curfews and tickets: South Florida counties have started imposing more severe limits. Miami-Dade County, which had already ordered a 10 p.m. curfew, passed a new law allowing police and code-enforcement inspectors to issue $100 tickets to people not wearing masks in public or obeying other county COVID orders. Broward County issued a new emergency order that closes bars, mandates masks at gyms, and imposes a nightly curfew that will last until August.

But is it enough, or is it coming too late?

Shutdown watch: Miami Mayor Francis Suarez appears to be bracing for another shutdown. He announced plans to meet this week with about 25 business leaders to discuss “the possibility of a future lockdown” if the spread of COVID-19 is not dramatically reduced in the next few weeks.

Miami-Dade County has rolled back portions of its reopening and implemented a mask order, but Miami-Dade Mayor Carlos Gimenez has so far resisted calls for a stay-at-home order.

Public health officials are warning, however, that if we impose new a stay-home orders but don’t increase testing capacity, contact tracing, and make masks the norm outside the home, we may make the same mistakes.

Data confusion: But if you can’t trust the numbers, how can you make a decision? That was the question Miami-Dade County found itself with last week as it reported test results that showed 27% average positivity rate for the past two weeks, while the Florida Department of Health calculated the key metric for the county as 20%. Both numbers are far above the level that epidemiologists say would give them hope that the virus is being suppressed and tell them if there’s enough testing.

Avoiding tough talk: Meanwhile, Florida’s Republican governor continued to use his near-daily press conferences to sidestep the tough talk and highlight what he sees as progress.

Central Florida “is probably in pretty good shape,’’ he said at a news conference in Apopka, where the 15% positivity rate is still a figure that indicates the disease is spreading throughout the community, health experts say.

As has become the pattern, he made no mention of the rising case numbers but did what he has done throughout this crisis: sidestep the tough talk and focus on out of context data that portrays Florida’s situation in a better light.

WHAT WE’RE TALKING ABOUT

Call for messaging help: The week began with an extraordinary plea for messaging help from the most prominent leaders in the new global epicenter of the coronavirus crisis. A bipartisan group of South Florida mayors met DeSantis Tuesday with a request for him to deliver a consistent and urgent message for people to wear masks, ask people to sacrifice, and convey a consistent sense of urgency that people need to act responsibly.

He listened carefully but didn’t deliver. Instead, he left it to them to convey the tough talk some people don’t want to hear.

Why does the governor’s messaging matter? By selecting narratives that avoid the tough truths but focuses on the positives, public health experts say he can influence how people evaluate personal risk — and they may choose behavior that increases risks to others. When asked why the governor does not see his role as an aggressive advocate for all Floridians to take actions that prevent infections, the governor’s communications team defended his approach.

Six DeSantis themes: The Miami Herald/Tampa Bay Times analysis of 66 of the governor’s coronavirus news events revealed these themes: 1. Never mention rising case numbers or increasing death count but focus on data that paints Florida’s situation in the best possible light. 2. Leave the harsher messaging — about school openings, bar closings and mask mandates — to his agency heads or local governments. 3. Use data to project a point of view. 4. Frequently compare Florida to other states but leave out the context. 5. Communicate using a lot of medical jargon. 6. Defending the hands-off approach and avoiding tough talk as “more sustainable.”

“Gov. DeSantis believes in a bottom up, decision-making process and not from the top down,’’ said Helen Aguirre Ferré, his communications director, who is leaving the governor’s office to head the state Republican Party.

Spinning video: The governor then also turned the meeting with the mayors into a promotional video, selecting clips of them giving compliments to the governor for being accessible, and suggesting they are “united to win this battle.”

The online video, however, didn’t show DeSantis speaking at the meeting wearing a mask. It also excluded the warning from the mayors, including Miami Beach Mayor Dan Gelber who called the situation a “really hard lesson in leadership” and urged the governor to unify the message by joining them to tell people what they don’t want to hear.

Republican dissenters: The governor’s approach to the mayors, to let them handle the tough decisions, reject a statewide mask mandate and insist on returning kids to classrooms this fall, follows in lockstep with the messaging of President Trump. Only once has DeSantis kept his face covering on while speaking into a microphone and that happened with the Miami mayors, but only after the president was seen wearing a mask.

Is DeSantis becoming increasingly out of step with other Republicans?

U.S. Sen. Marco Rubio on Thursday sounded an alarm about an insufficient supply of Remdesivir, the antiviral drug that has shown promise as a coronavirus treatment, in state hospitals. “[Hospitalization] numbers will get much worse if discharges slow down due to not enough doses of Remdesivir,” Rubio tweeted Thursday, hours after his initial tweet. “We can’t wait until July 27th for next allocation.”

Referring to his state as the new global epicenter, he told Fox News, “Look it’s bad. It’s not great.”

Rubio warns: Then, Rubio launched into the tough talk that DeSantis has avoided: “People need to wear their mask, they need to be more conscious of it. I believe they now are. But remember, the hospitalizations we’re seeing today are the infections that happened two or three weeks ago. Hopefully, if we can begin to correct that behavior now we’ll see improving numbers as we move forward into the next month,” he said.

Closer to Washington, Republican Maryland Gov. Larry Hogan wrote in a Washington Post op-ed that the administration’s coronavirus response was so inadequate that it had became “hopeless” to wait for Trump to lead and states were having to act on their own.

Testing lanes: Meanwhile, the governor acknowledged that Floridians are not getting their coronavirus test results fast enough and announced the state is adding dedicated “symptomatic” lanes at drive-through testing sites for potentially infected residents in South Florida to get more rapid tests.

Convention COVID tests: At the national level, all eyes are on Jacksonville, where coronavirus cases have been surging like the rest of Florida and Republicans are moving forward with plans to nominate President Trump there on Aug. 27.

Sources have confirmed that efforts are underway to find a vendor to administer tests daily to anyone who enters the indoor arenas. Convention-goers would be required to arrive early, submit to a rapid test, and await the results. A similar procedure was used for guests attending a Trump fundraiser at the Hillsboro Beach home of Troy Link, CEO of Link Snacks, which makes beef jerky, the Herald has learned.

Trump will be back in Florida for a July 31 fundraiser in Tampa and an Aug. 1 fundraiser at Trump National Doral Miami.

Meanwhile, as the Jacksonville metro area has imposed an order requiring masks indoors when social distancing can’t be observed, the Republican National Committee announced Thursday that it would limit attendance at the Jacksonville convention to delegates, a single guest for each, and alternates — a crowd of roughly 7,500, equal to about half of the capacity of the indoor VyStar arena. Trump is tentatively expected to give his speech at Daily’s Place, a 5,500-person, 90,000-square-foot outdoor amphitheater with a roof.

Election battlegrounds: Less than one month away is the August 18 primary when we’ll have a trial run on the general election in the age of COVID. In South Florida, the Miami Herald has it covered. We’re closely watching some crowded primaries.

The Democratic race to replace term-limited Sen. Oscar Braynon has six Democrats seeking the up-for-grabs Senate seat in a jam-packed South Florida primary. There are five candidates in a crowded House race to replace Ana Maria Rodriguez, who is running for the state Senate.

Stay safe all and remember, the Miami Herald and McClatchy news sites have lifted the paywall for many stories related to the coronavirus but we very much need your help. To support vital reporting such as this, please consider a subscription for unlimited digital access.

Know someone who’d like to get this? Send this to a friend to receive our weekly newsletter on politics and policy.

UConn Plans COVID-19 Tests For Students, Faculty and Staff Who Return To Campus

Sun Jul 19 , 2020
Students, staff and faculty who return to University of Connecticut campuses next month will need to get COVID-19 testing, administrators announced. But there will be no mandatory testing of telecommuting staff, faculty who teach only online or students who take classes online and live off campus. UConn is rolling out […] 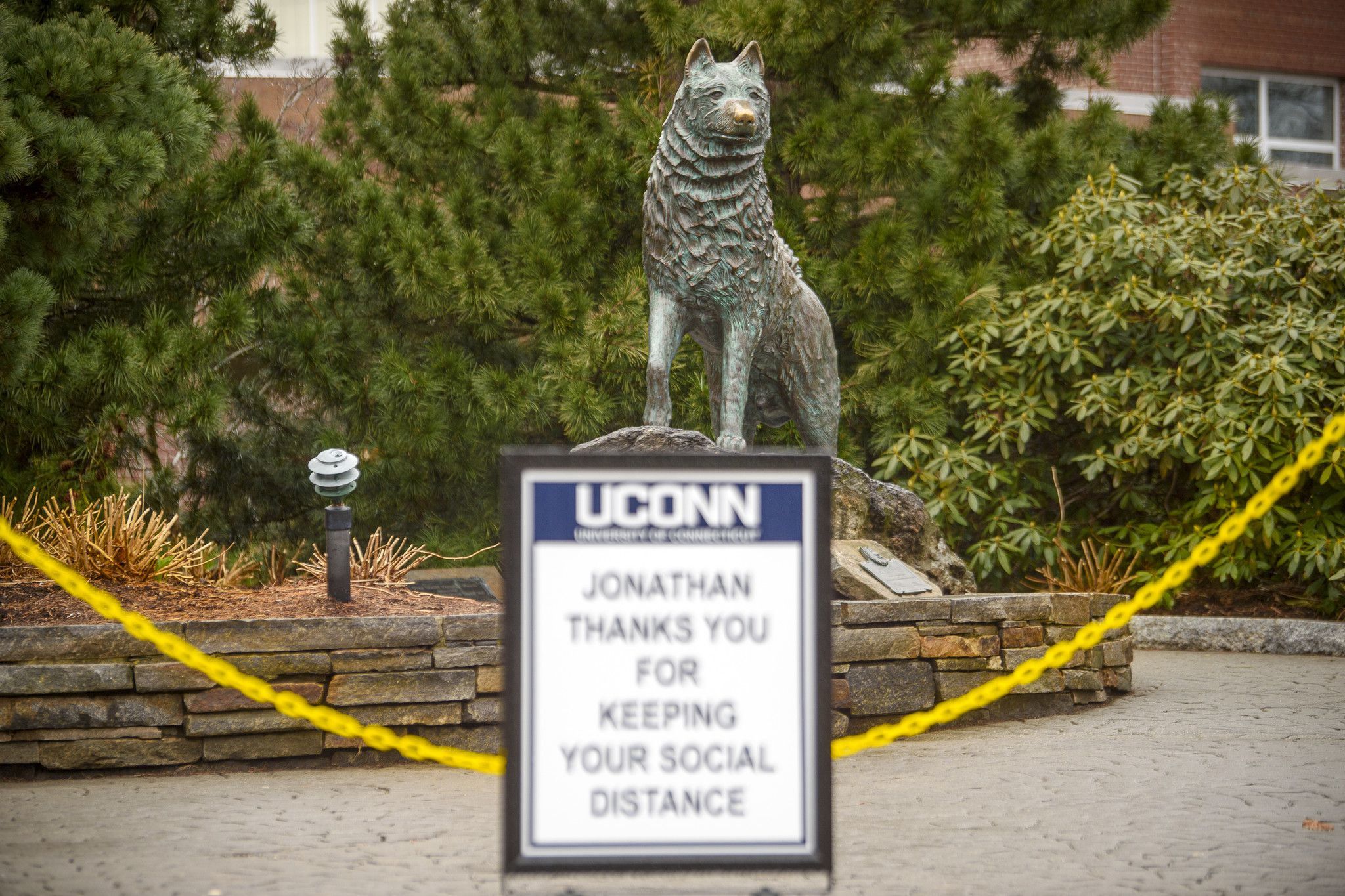