Guilherme dos Santos was 36 when he first noticed clumps of his brown hair falling out in the shower. His father had gone bald as a young man, and a panicky dos Santos became convinced he would meet the same fate. After some gentle encouragement from his wife, he began stocking up on hair-thickening shampoos and, when they failed, he took to Google and came across a clinic in Turkey advertising “miracle” hair transplants. They even offered to pick patients up from Istanbul airport, plus a night of recovery in a five-star hotel, all for £2,000 – significantly less than the £6,000 to £13,000 charged for similar procedures at UK clinics.

“It was so cheap, it stunned me,” remembers dos Santos, a taxi driver who lives in Bracknell, Berkshire, with his wife and nine-year-old daughter. “It doesn’t feel great when you look at your hands and see your hair falling out. I didn’t think twice.”

He flew to Turkey last year and, as you may have predicted by this point, did not receive the swanky, professional service he had been promised. The nurses at the “clinic” smelled strongly of cigarettes and did not wash their hands, he remembers, and the transplant itself was fairly rudimentary. He remembers blood dripping from his anaesthetised scalp during the procedure; afterwards, the back of his head turned a strange blue colour. He was left with severe scarring – “I couldn’t go outside without a hat, I looked like a monster” – and now has to pay a further £2,000 to have his scalp returned to normal.

It is easy to roll your eyes at a story of such apparent foolishness. The dangers of getting cosmetic treatment ‘on the cheap’, at an unregulated clinic in a poorer country than the UK, have become so well-known that it is almost a cliche. But it is an easier mistake to make than you might think, it seems, and it is not just those who travel abroad who are complaining. Doctors now report a worrying rise in British clinics offering similarly shoddy treatment. Many of them look and sound far more reputable than the average Turkish “miracle” clinic you might see advertised online, but they still leave patients with unnatural-looking hairlines and serious scarring, in some cases.

This week, a London clinic offered £15,000 in compensation to a Royal Opera House actor who claimed he was left with a wonky hairline following a procedure in 2015. Ivan Luptak, 38, paid £5,000 for the 11-hour operation, which involved the replacement of 3,000 hair grafts, at Rejuvenate Hair Clinics on central London’s Harley Street, one of a number of clinics in that area that uses ‘Harley Street’ on its website, although none have any connection to The Harley Street Clinic, a well-respected trichology specialist that has treated various leading lights, including footballer Wayne Rooney. Luptak hoped that “thicker hair” would give him confidence, but he emerged from surgery to find his hairline was “obviously higher” on one side, according to court papers.

“What most people don’t realise,” says Dr Greg Williams, president of the British Association of Hair Restoration Surgery, “is there’s no training for hair transplant surgery in medical school, or in any of the specialities such as dermatology or plastic surgery. There are no qualifications in the UK for transplant surgery, and there’s no regulation around who does it. Even in the last two or three years, there’s been a significant rise in the number of doctors doing it, because it’s viewed as easy and lucrative.”

Young and middle-aged men have always gone to extreme lengths to cling to their falling locks. Around 1550BC, the ancient Egyptians are thought to have rubbed donkey hooves and hippopotamus fat into their scalps in a bid to halt the balding process; a millennium-and-a-half later, Julius Caesar tried to hide his own receding hairline with a toupee. Men who seek out transplants are often mocked as vain and insecure – just look at the savage tabloid reaction to Rooney in 2011, who said he was “delighted” with his own procedure, adding: “I was going bald at 25 – why not?”

But losing your hair can be just as upsetting as losing your teeth or your fertility, say some of those affected, feeding into perceptions of masculinity and decline. In his autobiography, tennis player Andre Agassi described losing his luscious blond locks as like waving goodbye to “little pieces of my identity”, while former Liberal Democrat MP Mark Oaten blamed his use of a prostitute on a midlife crisis caused by a sudden loss of his hair. Commenting on his decision to spend thousands on hair treatments, Cold Feet actor James Nesbitt said: “It’s horrible going bald. Anyone who says it isn’t is lying.”

And in more recent years, the solipsistic demands of social media have forced men to focus even more on their appearance, says Dr Coen Gho, founder of the Hair Science Institute, which has clinics in London, Hong Kong, Amsterdam and Paris. Many men now do not meet their life partner until their thirties, he adds, by which point Mother Nature might have already cast its spell: male pattern baldness affects one third of men by the age of 35, and half by the age of 50. Around half of women over 65 are affected by female pattern baldness.

Although the UK boasts several reputable hair transplant surgeons, the demand from balding men to reverse nature’s tide is being met in some quarters by “black-market pirate clinics”, as the International Society of Hair Restoration Surgery (ISHRA) puts it. Dr Gho says that 40 per cent of the patients he sees come to him to fix shoddy work they have received from lesser practitioners.

As a young man, Spencer Stevenson considered himself fairly handsome, and was even nicknamed ‘The Hoff’ – a reference to 1990s dreamboat David Hasslehoff, who shared Stevenson’s thick brown hair. But he began to lose it in his early twenties. “My self-esteem was heavily knocked,” he remembers. “Because I had so much hair beforehand, it really traumatised me.” Insecure and desperate, he signed up for a transplant at an obscure clinic, which left him with an “unsatisfactory, unnatural, very pluggy appearance”. Since then, the 44-year-old has undergone 13 transplants over 20 years, costing him almost £40,000. “It’s a long-term commitment – nobody just gets just one hair transplant.”

He now presents The Bald Truth, an online call-in programme, alongside Spencer Kobren, founder of the American Hair Loss Association. Seven out of ten calls he receives on the show are from men who have received slapdash transplants, he says. “Press pause. Use the internet,” he advises. “Any clinic that is part of the ISHRA is worth having a consultation with. Because of the huge demand, there are just so many clinics opening up, using a dentist room at the back and offering surgery with no experience and no training.”

It is advice shared by Williams, who says you should be particularly wary of any clinic that does not name its doctors online (up to 40 per cent of those he has searched fall into this category). Do not let a non-doctor “advisor” make any surgical decisions, he adds, and make sure you know exactly who is carrying out the procedure: if they are not a doctor, then don’t do it. And only use a clinic if it is registered with the relevant regulatory body: in England, that’s the Care Quality Commission (the UK’s other nations have equivalent bodies). “Don’t be seduced by discounts, offers and flashy websites,” he adds. “Do your homework properly.”

Because when it comes to hair loss, he says, there are no short cuts.

Deepfakes are the most dangerous crime of the future, researchers say

Wed Aug 5 , 2020
A woman in Washington, DC, views a manipulated video on January 24, 2019, that changes what is said by President Donald Trump and former president Barack Obama, illustrating how deepfake technology can deceive viewers. – “Deepfake” videos that manipulate reality are becoming more sophisticated and realistic as a result of […] 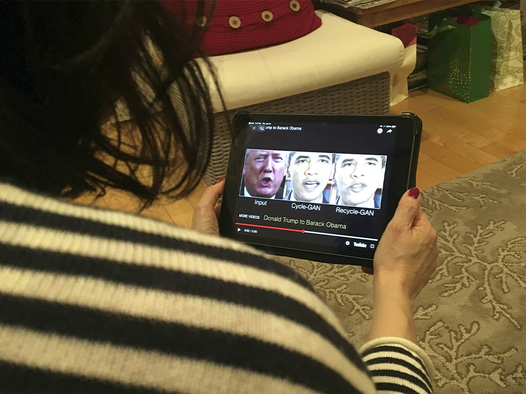